Article and Photo by Alex Colvin 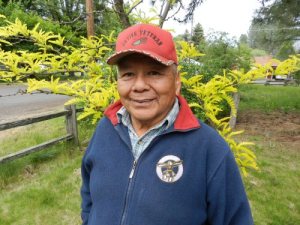 Mr. George was born in Redding on October 26, 1945. He attended Burney Elementary School and graduated from Fall River High School in 1964.

From 1966 to 1968, he served in the U.S. Army as an “Atsuge Warrior.” He was an M-60 machine gunner. His last tour, before receiving an honorable discharge, was in West Berlin as a guard at the Spandau prison where Rudolph Hess was a prisoner.  He is a member of VFW Post 5689, of which he served as Senior Vice Commander from 1991-1992.

After returning home, Mr. George was owner and operator of T.G and Sons timber falling business for 34 years.  In 1983, he served as Vice President of the Burney Chapter of the Full Gospel Businessman’s Fellowship.

Mr. George is a member of the Astuge band of the Pit River Nation.  While attending a pow wow at the Pine Ridge Reservation in South Dakota, he had a night vision. He was told, “You are a mighty warrior amongst my people.” Shortly afterwards, he was elected Chairman of the Pit River Nation. He served as Chairman from 2000-2001. During that period, he was part of a delegation of the Redding Rancheria and Pit River Tribe who went to Washington D.C. to retrieve Ishi’s remains from the Smithsonian institution and return them to California. Mr. George continues to participate in tribal affairs as a respected elder.

Honored to accept the role as Grand Marshall, Mr. George said, “Let’s work for unity in the Burney community. We want new ideas and we want to get the young people involved. This is the 21st century and we need to get aboard. Let’s move out of the ‘horse and buggy’ era. People don’t need to be afraid of losing their old truth.  Working together, we can go to a new level of more wisdom and more understanding.”