On September 12th and 13th,  PG&E increased the water flow below Pit 5 to between 1250 to 1500 cubic feet per second for the second time this year. Each day, more than 50 Northern California kayakers came to enjoy the thrill of riding level III, IV, and V rapids between the Madesi River Access and J.B. Black Powerhouse. 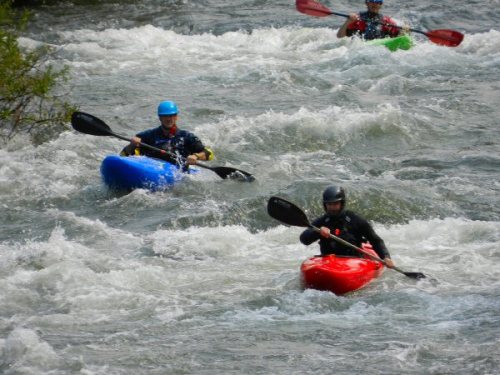 Kayakers above the bridge at Big Bend

The entry point was the Madesi River Access. At 10 a.m. Saturday, the area was buzzing with people unloading their kayaking gear and camping equipment for the two-day event.

Steve and Christina Figone and friends from Chico

Lauren Bridgeman and Linda Holdren from Spring Rivers, a company that provides biological and physical assessments of aquatic and riparian ecosystems, came to register the kayakers and monitor the event for PG&E. Downriver, below the Big Bend Bridge and at J.B. Black Powerhouse there were two more Spring River employees to track the kayakers and make sure that everyone who entered the river completed the one-and-a-half-hour course down the river safely.

As the kayakers gathered and mixed and mingled, I met groups of people who had come from Sacramento, Placerville, Chico, Lake Tahoe, Trinity County, and Redding. It was a really cheerful, friendly gathering. Groups began entering the river about 10:30 a.m.

Ian Janoska from Placerville organized a race, the “Pit 5 River Games.”  The race took place  Saturday afternoon about 1:30. Ten people participated, racing about one mile. The rest of the course was free kayaking.

As the kayakers came to enter the river Saturday morning, Janoska and his friend, Lauren Burlison, a student at Simpson College in Redding, were there to sign people up for the race.

Janoska and Burlison signing up racers

A few people had come to join the kayakers in rafts.

Heading out to ride the rapids

One of the kayakers from Redding told me that there were two overlooks on the way back to Big Bend where I could catch a view. I found one of them. It actually was kind of scary standing on the dirt edge of a 100 foot drop-off looking down, but just as I got there a few of the kayakers passed underneath.

View from the overlook

Then down to the bridge at Big Bend.

The bridge at Big Bend was the best of the few places to watch the kayakers. They had been riding the river for over an hour. Only the kayakers themselves know the full thrill the river held as they surged through the beautiful tree-lined gorge.

The bridge is also a fun place to meet others who want to watch. One lady from Lake Tahoe had come up with her husband and was patiently waiting for him to come round the bend. Another woman showed me pictures she had taken of the kayaking on Feather River. I also met Juniper Rose, a kayaker from Trinity County, as she watched some of her friends master the white water.

As we talked, I discovered that she was the sister-in-law of a friend from Oak Run that I have played music with.

I spent quite a few hours on Saturday out on the bridge taking hundreds of pictures. On Sunday afternoon, I returned with my wife Linda and we met more people as the last runs finished.

Coming out of the river below the bridge

At 4:00 PG&E began lowering the flow back to 450 cfs. Thus ended the Pit 5 Reach Whitewater Flow for 2015. For more on the whitewater flows see Pit River Whitewater Draws Kayakers.