Autumn has arrived. The days are shorter and the temperatures are cooler. This is prime time for fishing the waters of the Pit River Basin including Hat Creek, Baum Lake, Burney Creek, and the Pit River.

The temperature of the water in upper Hat Creek remains cool year round. The water in Lake Britton, Fall River, Ahjumawi State Park, and Baum Lake, however, rises in the hot months of the summer. During the warm season the bass in Lake Britton and the waters of the Ahjumawi stay in the deep cooler water or swim in the shady areas by the shore protected by logs where they are more difficult to catch. Now, as the water cools, the fish are rising in the open cooler waters.

In the streams, the trout being planted by Crystal Lake Hatchery are more mature and larger and the fishing areas have fewer fishermen because the hunting season has begun.

I stopped by Burney Sporting Goods and talked with Pat Taylor. He said that trout fishing in Hat Creek was good. Several people had caught six and seven pound trout on Hat Creek. Taylor said that the fishing in Lake Britton was fair to good. He also said that people had been catching crappie.

On Saturday, October 3, I drove to the West Fork of Hat Creek in Cassel. Crystal Lake Hatchery had planted the creek on Friday. Upstream from the bridge I met Bob Lee, and avid fisherman who had come up with two friends from Susanville.

Lee said that this is his favorite spot to fish. Usually, he comes up every year on the first weekend in October with his younger cousin. This year his cousin couldn’t come so he brought two friends.

Lee loves the outdoors and hunting and fishing. He has five children. Though his 13-month old has not yet been able to fish, he has already bought her a fishing rod. His three year old son already fishes. Next week he hopes to go to Colorado with his 15-year old daughter to hunt. His daughter got an elk tag and a deer tag and is looking forward to the opportunity to hunt with her great grandfather who lives in Colorado and hopefully get her first elk.

Lee was really excited to be out because he hadn’t been able to fish since June 19 due to a heart attack.  His enthusiasm was rewarded. Almost every time he threw his line out he got a bite. The first few took the bait. He loaded the hook with PowerBait and tossed it in. As we talked, he suddenly shouted, “I got one!”

He gently brought the fish in and removed the hook from the lip and held it up for me to catch a photo.

That was only the first. A few minutes later he landed another. Lee had arrived only a few minutes before I came and in the short time I had been there had caught two nice rainbow trout.

Meanwhile down toward the bridge another family had arrived.  I walked down and met Ben and Raquel Searcy from San Jose. They had brought their two six-year-old twins Manuel and Samuel, and their eight-year old daughter Annmarie up for the weekend to fish. Manuel and Annemarie were very happy to show me the fish they had just caught.

I could see that the fish were plentiful. I was also infected by the pride and joy the children felt showing their catch as well as the happiness that their parents experienced. The sky was a clear deep blue. The air was crisp and fresh. The landscape was intoxicating. Everyone was happy. It was a taste of heaven.

I decided to drive farther up Hat Creek to see how things were. I stopped in at the Rancheria RV Park and talked with the owner, Busy Ryman. She said she hadn’t heard about any six or seven pounders but that some fishermen had caught five pounders recently. At Rim Rock Ranch in Old Station I received a similar report.

I stopped in at Bridge Park and met Dan Calestini from Dixon, California. Calestini works in the Vacaville area and has some family in Fall River Mills. Whenever he can get off early Friday evening, he grabs his fishing pole and comes up to Pit River country to visit and fish. Bridge Park on Hat Creek is one of his favorite spots. On this weekend he had brought his granddaughter Clara. They had come fishing with his nephew and his grandson, William Klatt, from Fall River Mills.

I asked how the fishing was and he called out, “William! Show the man your fish.”

William raced and proudly displayed two fish. One he had caught using salmon eggs and nightcrawlers. The other his uncle had caught. Once again I felt the glee. 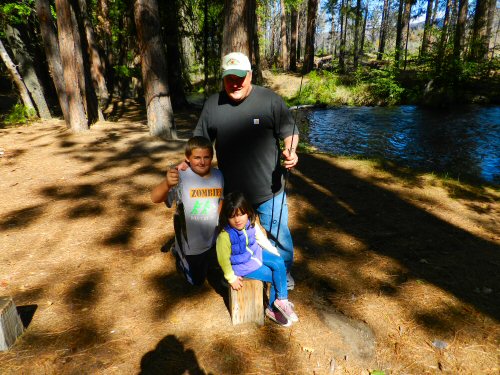 Dan Calestini with his grandchildren and fish

Beaming as he talked about his family and fishing Calestini said,  “There’s nothing like this, being with family outdoors in such a beautiful place. There is something spiritual about it.”