Thanksgiving is upon us and this year we can give thanks that more snow has been added in the higher elevations around Burney. Snow began just after 11 a.m. on Tuesday and continued on and off into Wednesday morning. Burney got 1-2 inches, enough that when I woke up, we had a beautiful wintry landscape.

Linda and I decided to take a drive out to Baum Lake. As we headed away from Burney past 4 corners there was a little bit less snow, but turning on to Cassel Road the ponderosas were still laden with snow.

Giraffe in the woods

The first place we stopped was at Packway. I always love to bring friends who visit Burney to see the collection of metal sculptures displayed beside the road. People are usually amazed to see such creatures out in the middle of the woods.

After shooting some pictures, we continued on to Baum Lake.

On Monday, I stopped into Burney Sporting Goods to see what was going on in outdoor activity. Not much. Waterfall season is still open, but there wasn’t a lot to report. Turkey and quail season are open. Shawn Lewis said that one person had gotten a hen, but that others had reported that they hadn’t seen many wild turkeys. There are pheasants in the Fall River area, but mostly on private ranches where they can’t be hunted. 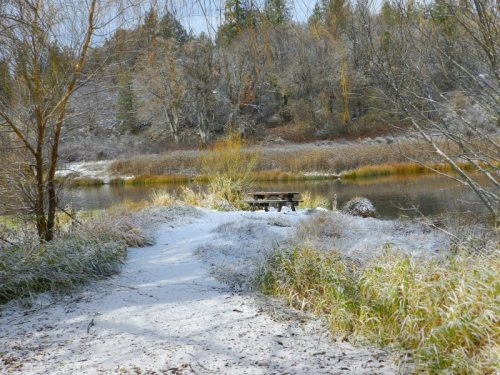 As for fishing, most of the areas are closed. Lake Britton is pretty dead. Baum Lake is one area still open. Crystal Lake Hatchery usually stocks it around Thanksgiving but Lewis doesn’t think that they have done so yet this year. The Hatchery is closed to the public for improvements to the water supply.

Road to PGE campground in Cassel

Outdoor activities in Burney thrive from the beginning of fishing season into early November. As the weather gets colder the area teams with craft shows and bake sales.

But, as Robert Frost said, when the snow falls, the “woods are lovely, dark and deep.” Lovely for snowshoes, cross-country skiers, hikers, and just plain day-trippers like Linda and me.

We decided to take the road from Baum Lake over the hill to the PGE campground by Cassel. There were some beautiful views of the newly fallen snow across the countryside.

I got out to take a few shots of West Hat Creek by Cassel. There was still a lot of orange autumn foliage mixed in with the snow-laced evergreen.

When we left Cassel to follow Cassel Road back around to Highway 89, I said a little prayer that we might get a good picture of a deer. But our first encounter was with some friendly horses.

Linda had fun taking pictures of the horses. Look for some of her shots on her photocards.

Then as we passed Rising River Ranch, I caught a glimpse of my deer out of the corner of my eye. My little prayer was answered. A nice buck in the woods.

We need more snow. We can be grateful that this year we have already had as much snow as we got all of last year. More is expected next week and we still haven’t really begun winter yet so we can be hopeful that we get a good snowpack this year.

In any case, it is wonderful to be in a place where so much natural beauty surrounds us. Each time I go out to shoot photos with Linda is another day in paradise.