On Saturday evening December 20, the Grace Community Bible Church put on a wonderful heart-warming Christmas play entitled “A Candy Kane Christmas.” The play is a comedy about a teen discovering the true meaning of Christmas.

The snow was falling gently as Linda and I arrived just before showtime at 6 p.m. We could feel the love of Jesus as we received a friendly greeting at the door.

The evening’s entertainment began when Betty Luck, one of the Church’s eldest members, came up to sing “Silent Night” in German.

Mrs. Luck will be 90 years old in April. She was born in Romania. She met her husband, an American soldier, in Germany just after the end of World War II and returned with him to Burney where she has lived ever since. She has been attending the church for 68 years.

After Mrs. Luck inspired people with her singing, the children’s choir came up and sang one of the play’s songs about Jesus, “Perfect for You.” The Children’s Choir was made up of Ciera, Titus, Levi, Jedediah, and Abel Niemeir; Micah and Abby Westlund; Trevor Winkelman; and Ava, Brody, and Ryah Goza. The children sang like angels. 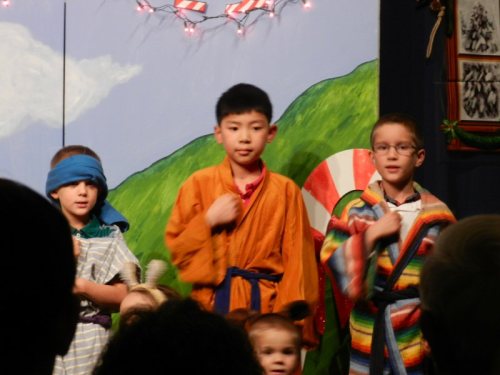 Members of the youth shoir

The play began. A brief recap of the plot:

Sixteen years earlier, Walter and Kitty Kane (played by Arden and Millie Hathaway) had a baby on Christmas Day and named her Candy.

Time has passed. Candy Kane (Cassandra Niemeir) comes on stage and vents. For years, other children at school had made fun of her because of her name. On top of that, the Christmas celebration always overshadowed her birthday. Her discontent had intensified every year during the Christmas season. 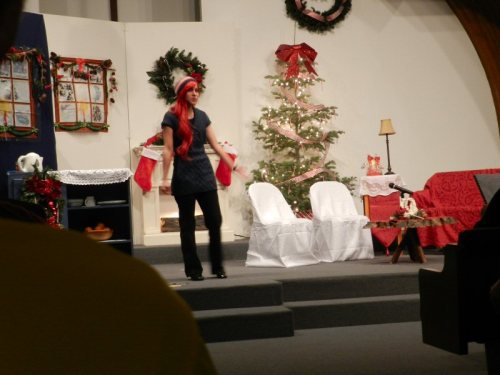 Candy’s father and mother come on stage and call a family meeting to discuss the family’s Christmas plans. Candy’s two sisters, Mary (Trisha Niemeir) and Jane (Ceira Niemeir) are also there. In a well played scene combining pathos, Christmas cheer, and humor, Candy reluctantly agrees to buy a present for a boy named Jesu’s and to prepare an act for the church’s Jolly Follies talent show.

On her own, Candy decides to reinvent herself. She will bleach her hair and change her name from Candy to Candé. Her two friends, Sara (Savannah Niemeir) and Lori (Emily Winkelman) agree to help her.

Unfortunately, they don’t follow the directions properly when treating Candy’s hair. As a result, her hair is streaked. When her family returns, they are alarmed. She looks like a clown. Candy tells her parents that that is why she did it – so she can play a clown in the Jolly Follies. That unleashes a torrent of corny Christmas jokes.

But while the audience is in stitches, Candy is more miserable than ever until finally, when the Pastor of their church comes over for dinner, she breaks down because her “elf-esteem is so low.”

Pastor Chris Kringle stops by for a chat

The day comes for Candy to present her gift to Jesu’s Lopez (Luke Niemeir). Candy thinks that Jesu’s hates Christmas because of his name. But this is not so. Jesu’s loves his name and loves Jesus, but he is upset with Christmas because it has become so commercialized and many people forget the true meaning.

Candy, Jesu’s, and Pastor Chris go to the hospital to visit Jesu’s younger brother Paco (Titus Niemeir) who is ill. At the hospital, Paco is being attended at the bedside by his brother Padro (Micah Westlund).

Paco and his brother at the hospital

While the pastor and Jesu’s step out for a moment, Candy is left to watch Paco. She questions why her life is so sad and confused and why poor little Paco is sick. As she does so Paco wakes up and says, “God didn’t make me sick!”

Even though sick, little Paco testifies to his faith and the love of God

Truth cometh out of the mouths of babes. After Candy  hears little Paco’s testimony, Pastor Chris explains how Jesus came into the world and then died to redeem mankind from sin.

Candy realizes how selfish she has been and, back with her family, bursts into a beautiful rendition of “I Will Worship You.” 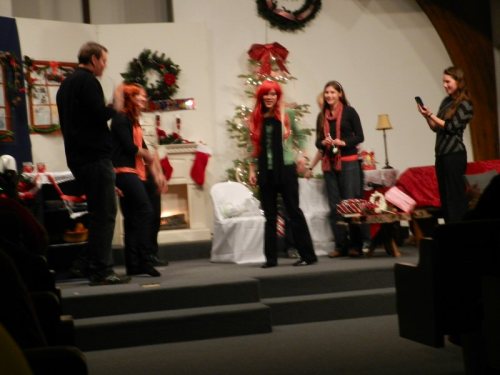 I Will Worship You

Tears came to my eyes and it was difficult to take pictures.

Pastor Chris discloses to Candy that he was ridiculed as a child by his peers because his last name is Kringle. He also teaches Candy a new meaning to her name. The candy cane is shaped like a shepherd’s staff. The white symbolizes Jesus’ purity and the red symbolizes His blood. The candy cane is to be broken and shared with others.

Filled with new life and inspiration Candy joins together with the entire cast and children’s choir to sing the song the play began with, “Perfect for You.” They then concluded the production with “We wish you a Merry Christmas.” 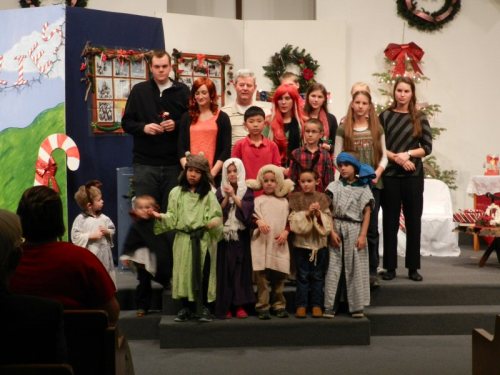 We Wish You A Merry Christmas

After the play concluded, Pastor Winkelman invited any who were in need of God’s saving grace to accept Jesus into their heart.

He then presented a bouquet of flowers to the director of the play, Debra Hathaway.

This short rendering of the play does not do it full justice. All of the actors did a wonderful job. The set was wonderfully designed, decorated and divided. The action took place center and right stage. The left stage hosted the Jolly Follies, a Christmas talent show that embellished the play between scenes.

The music between scenes included a violin and piano duet by Trisha Niemeir and Brenda Hathaway; “Away in a Manger,” and “Go Tell it on the Mountain” by the children’s choir; and a thoroughly enjoyable barbershop quartet rendering of “Born to Die” sung by Tom Whilite, Arden Hathaway, Pastor Henry, and Tim Winkelman.

After the program, people moved to the dining hall where everyone shared joyful fellowship and delicious treats.

Pastor Henry Winkelman said, “My desire is that everyone can learn the true meaning of Christmas. That is the birth of Jesus Christ.”

Debra Hathaway, the Director, said “I love to do these plays on Christmas and Easter because it is a great way to let people know that Jesus is Lord.”

When I complemented Cassandra Niemier on her performance as Candy Kane, she said, “It is all the Lord.”

Amen. Have a Merry Christmas.