At noon on February 9 the Burney Chamber of Commerce held their monthly meeting. Chamber President Jill Barnett chaired the meeting  and introduced Kaylynn Harper from the Intermountain Teen Center as a guest speaker. 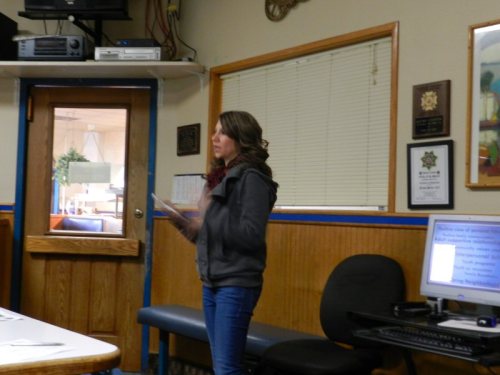 Kaylynn Harper at Chamber of Commerce

Ms. Harper gave an interesting talk and PowerPoint presentation on the purpose, history, and activities of the center. The talk was accompanied by beautiful pictures of trips and activities and highlighted by several success stories.

Members of the Chamber responded warmly with questions, suggestions, and ideas for cooperation. (For more on the Teen center see Intermountain Teen Center guest speakers at Rotary Club of Burney-Fall River and An interview with Kaylynn Harper, Program Coordinator for the Intermountain Youth Center.)

After the talk the Chamber had a fruitful meeting discussing ongoing and upcoming projects for Burney. Among the topics discussed were the Community Benefit Project, TOT Grant with Fall River, the development of a five-year plan, the Ham Run, finding a new location for the Farmer’s Market, and Burney Basin Days. For more information on these activities call the Burney Chamber of Commerce at 335-2111.

Jill Barnett said that the Burney Basin Days Committee had held their first meeting in the conference area of the Pit River Casino. Future meetings will be held on the first Tuesday of each month at 10 a.m. The Burney Basin Days Committee is an Ad Hoc Committee of representatives of the various organizations in town that organize the major activities of Burney’s largest event of the year. People from the public who want to volunteer or help are also invited to attend.

Renee Angel was elected treasurer of the Chamber to replace Pat Thomason who moved to Arizona. Sandy McCullar was elected as a new member of the Board of Directors.

Before the meeting adjourned, Pat Nugent announced that Jim Simmons would give a very interesting talk entitled, “What’s in the Water” at the Burney Community Center on Tuesday February 16 at 7 p.m.