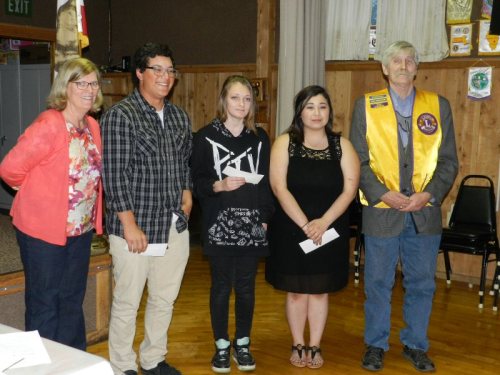 The students were introduced  to the Lions by BHS Vice Principal Becky Torgrimson. Lion George Whitfield presented each student with a check from the Burney Lions Club in recognition for their achievement. Senior Students of the Month received a check for $100, and 8th Grade Student of the Month Courtney Broome received $50.

Family members of the students were also welcomed and introduced. Marilyn Madera was accompanied by her parents Maria and Emilo and her brothers Eddi and Alex. Courtney’s father Josh Broome was present. Burney School Principal Ray Guerrero and School Counsellor Liz Guerrero were there to see their son Ray honored. One of their daughters also attended.

Selection as Student of the Month is based on academic performance, talent, character, and activities. In her introduction of each student, Vice Principal Torgrimson described each student’s school and community involvement, interests and hobbies, and goals and aspirations.

Marilyn Madera is a cheerleader. She is active in  the St. Francis Youth group.  She is on the Spirit/Float Committee. She likes to read, draw, sing, cook, and take care of children. She looks forward to attending college and hopes to become a pre-school teacher. She would also like to travel to Puerto Rico and other countries such as Japan and Argentina. She speaks fluent Spanish and English. Her favorite subject in school is English.

I asked Ms. Madera if she had a philosophy of life or motto that guided her. She said,  “You only live once, so do it right.”

Courtney Broome is active in her church. She is good at art and drawing. She hopes to study photography and she would like to visit Alaska.

Ray Guerrero plays baseball. He is a member of the Leo’s, the Chess Club, CSF, the Leadership Club, and ASB. He is an avid Giants and Warriors fan and hopes to be able to go to a Warriors’ game. He likes music and plays drums. After graduating, he will attend Merced Junior College on a baseball scholarship. He would love to play professional baseball.

Burney Lions honor and reward one outstanding 8th grade student and one senior student each month. This is just one of the many ways in which the Burney Lions Club has been serving our community since 1946.