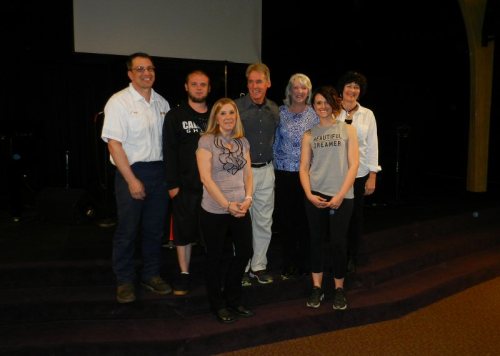 Vince Wall and the public speakers of Spring 2016

Mr. Wall began the program by giving a brief synopsis of the course. He revealed that Toastmasters International was the source for much of the content taught. Mr. Wall explained that the students would make their presentations in teams with one student introducing the speaker. Introducing a speaker is one of the skills learned in the course. 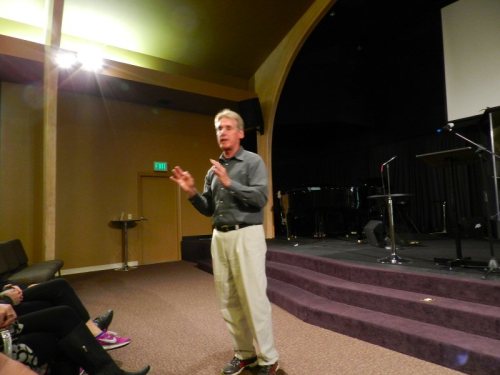 The first speaker was Doug McGregor, introduced by Daryl Aberle. 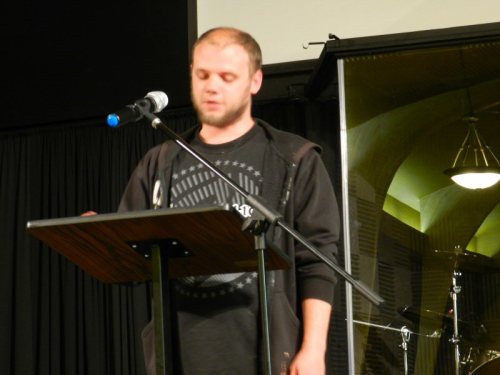 Doug McGregor – What it means to be a pastor

Mr. McGregor spoke about “What it means to be a pastor.” He talked about the qualifications and responsibilities of church ministry and also explained his motivation for wanting to be a minister. Mr. McGregor has been teaching youth Bible study. He talked about how satisfying it is to experience the gratitude of his students and to be a positive and helpful influence in their lives. He acknowledged how grateful he was for those who had mentored him. He hopes that in developing skills as a pastor he can be used by God to help people in his congregation and community.

Mr. McGregor then introduced Daryl Aberle, who spoke about “Inventory.” 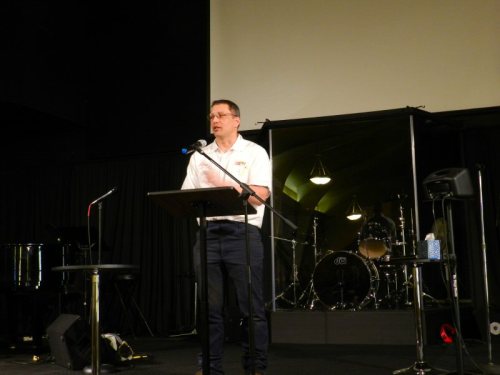 Many people in town know Daryl because he works at the Burney Les Schwab. He has been working in the automotive tire industry for 16 years and has been at the local Les Schwab for 3 1/2 years. Mr. Ablerle first explained what inventory is, using examples such as a grocery list. He then informed us that the local dealership has eighteen categories of products comprised of thousands of items. Each month they do a thorough inventory of all their stock. In order to do so, they use four teams of two workers. One checks the stock and the other writes down the numbers. He said that having a good program helps to expedite the process. They allow one week for inventory but can usually accomplish the task in two days.  All of this is done while the shop is still taking care of customers.

The next speaker was Carrie Wade introduced by Kathy Newton. 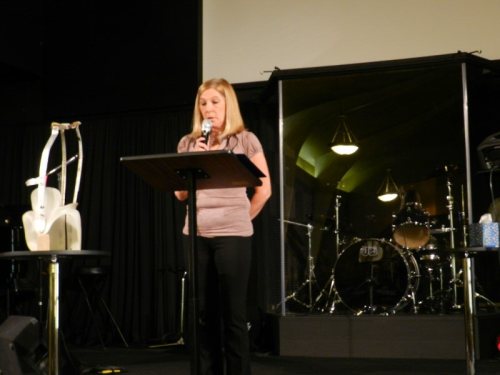 Ms. Wade’ topic was “Scoliosis.” Her theme was overcoming. She began by saying that in our lives we all have to overcome something. Then she gave a moving testimony of her teenage experience with scoliosis. On the table to her right was the brace that she had to wear for a year.

Ms. Wade was diagnosed with idiopathic scoliosis in 1974. When she initially did not respond to treatment, it was determined that she would need to undergo surgery. After the surgery she continued to wear her brace. In April 1975 when she went to have the brace removed, the doctor was on vacation and she had to wait another month. This was disheartening. Her mother consoled her by saying that when the brace was removed she would take her shopping for new clothes and take her out to dinner.

The next speaker was Jill Binger. She was introduced by her teammate Megan Howard. 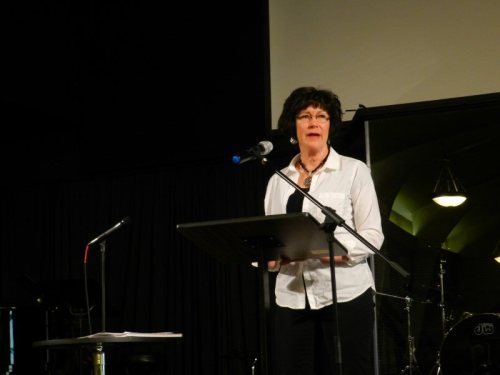 Ms. Binger spoke about “Drought-resistant Plants.” She gave three reasons why it is a wise choice to plant drought- resistant plants:

She explained the difference between annual and perennial plants and said that most drought-resistant plants for this area are perennials. She gave several examples of plants she has planted including lavender. She recommended choosing plants that flower at different times so that one’s yard will have continuous bloom. Ms. Binger illustrated her talk with numerous pictures that she passed around the audience.

We live in a zone 5 climate. Redding is a zone 8 climate. She advised that if you buy your plants in Redding, make sure that they will grow in our zone 5 area. She also clarified that plants need more care until they are established. She recommended watering in a small circle dug around the plant so the water seeps deeper into the soil to support the lower roots. 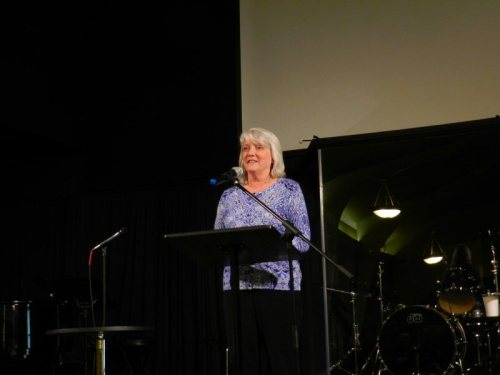 Kathy Newman is the Church administrator at WOLA. Her talk was a poetic mix of metaphor and anecdote describing ways in which she had experienced God in nature. She described how God can whisper or can shout like a cliff or an ocean wave.

She recounted a tale of a hike by a glacier. At one point as they were making their way, the trail narrowed perilously to a foot-wide, slick, muddy track over a raging river. As she watched others make their way ahead of her, she imagined herself slipping and falling into the torrent. Then, as her turn to cross approached, she felt God inspiring her with the counsel to stop imagining negative outcomes and to begin imagining positive outcomes. So she pictured herself deftly putting one foot in front of the other and making her way safely across the dangerous passage.

And that’s exactly what she did.

The lesson from that experience with God stuck with her and she has continued to employ it in her life since that time.

She shared how the Japanese refer to a refreshing walk in nature as a “forest bath.”

One other tale she told was of a visit to a zoological park in Mendocino County where she had an encounter with a 20-foot tall Rothschild’s giraffe. She described feeding the giraffe, first from her hand, and then, from her mouth, as the giraffe bent over to take its food while looking into her eyes. He had big eyes with giant lashes.

That night she said God again stirred her soul and she concluded the story with a passage from Psalm 116 including the following:

I love the Lord, because he has heard
my voice and my pleas for mercy.
Because he inclined his ear to me,
therefore I will call on him as long as I live.

The image of a giant giraffe bending down for an eye-to-eye encounter became a metaphor for God’s redeeming grace. It was a wonderful speech.

The final speech of the evening was delivered by Megan Howard, introduced by Jill Binger. Megan’s topic was “WOLA Fitness and What it Has to Offer the Community.” 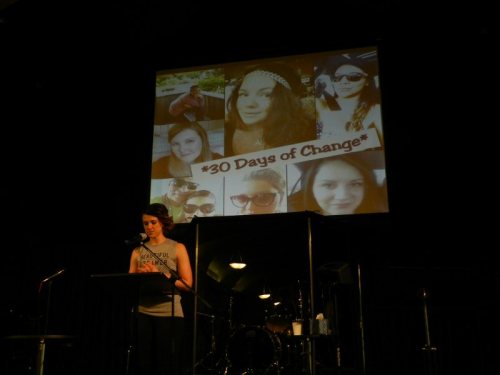 Megan shared how she became involved with fitness therapy while at college in Texas. She was experiencing an eating disorder and was partaking in some fun but potentially unhealthy lifestyle choices. She went to a gym and found the people and the physical workout therapeutic and life-changing. She became a certified physical trainer, married a young Texas man, and came back to Burney.

Upon returning home she wanted to share her talents with the community. She led exercise groups in various locations including her basement and her porch. WOLA was looking to expand their ministries to serve the public and she proposed offering a fitness program with the theme “Faith, Family, and Fitness.”

Megan began teaching with no equipment. Over the past six years it has grown to include 15 instructors and more that 140 participants. Thanks to donations they now have a weight room and cardiovascular equipment. WOLA Fitness tries to provide “something for everyone.”

When she began she felt it was good for her students to push themselves and experience the pain of sore muscles. Since then she has modified her approach, tailoring the training to each woman’s individual needs and goals. Participants speak of the program as family. Megan read a testimony from one woman emphasizing the heart of the program.

Her talk was illustrated with pictures on a large video screen. By the way, while there are as yet no training programs for men, the weight room and cardiovascular equipment are available for their use.

After each speech the audience had the opportunity to ask questions related to the content of the speech. Then Mr. Wall gave helpful tips to each speaker on ways they might improve their performance.

This was an evening packed with information, inspiration, and helpful advice. The entire program took just over one hour. The fact that the speakers could communicate so much information and inspiration so lucidly in such a short time is a measure of the success of the course.

One other lesson that I took out of the experience is “Don’t underestimate your neighbors.” Every person is a well-spring of information and experience. Every person has a story to tell. Many people fear speaking before an audience more that they fear death. Yet, every person has a valuable speech to make.

Filed under Burney, Churches, Word of Life Assembly of God