After voting on the morning of June 7, Linda and I decided to treat ourselves to breakfast at McDonald’s. After ordering, I espied two young two young hikers sitting in the back booth with large 50 lb. back packs.  I approached them.

Gummy Bear is a young man from St. Cloud, Minnesota who is hiking the PCT trail from Mexico to Canada. He has been hiking with his friend Hydro, a young woman from Fargo, North Dakota.

“Are you just getting into town or are you on your way out?” I asked.

“We’re just about to leave.”

“Okay, as soon as Linda I finish our breakfast we’ll drive you out.”

As we ate, Gummy Bear and Hydro told us that they had experienced many amazing things on the trail. They had begun their  hike on March 28 at the Mexican border. They had hiked hundreds of miles through the desert of Southern California and then had ascended the high Sierra’s.

“There’s still a lot of snow, but it’s starting to melt,” said Gummy Bear. “In a few places, hiking through the snow fields, we lost the trail, but fortunately we have a GPS so it wasn’t too bad.”

Hydro said that she had had quite a battle with blisters in the early part of the hike. She had found a powder that helped to ease the friction and alleviate the pain. Blisters form more easily when the feet are moist so the hot hiking through the desert can be a problem. As she continued on the blisters went away. Gummy Bear said with a smile that he had been “blister free.”

This was Hydro’s first major hike and her first visit to California.

Gummy Bear said that in the early part of the hike in the South they had met people on the trail almost every day, but as they got farther north with the vast stretches they would sometimes go three or four days without encountering anyone.

I told them that I had been following a blog named Tandem Trekking where a young writer named Lindsay and a photographer named Kyle were detailing their daily experiences on the PCT. 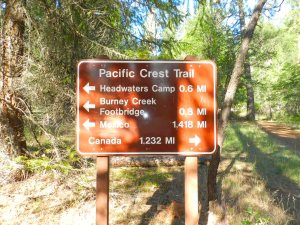 We talked about Poodle Dog bush, a mountain shrub that grows in places and secretes a skin irritant that is worse that poison oak. Gummy Bear and Hydro had hiked through several areas where it was abundant but fortunately had not been affected.

One of the most unsettling things for the young hikers had been coming across rattlesnakes. Apparently, this is a good year for snakes. They encountered a number of them in Hat Creek area. Each of them had separate encounters within the past few days. Gummy Bear had come across one in high grass, coiled, tail rattling, ready to strike, only a foot away. He quickly bolted away without being struck. Hikers, be aware!

Well, we finished breakfast and all piled into the jeep. Our young hiker friends opted for me to take them to Burney Falls Park. They had actually stopped in Burney because a family member had shipped them a package. They thought the package would be at the Burney Post Office. It wasn’t. When they checked the tracking number they found out that it was at Burney Falls. So off we went.

Linda and I drove them to the park and dropped them off at the entrance. They made it over 14oo miles in a little over two months. They’ve got another 1200 miles to go. God bless them.

Burney is friendly to PCT Hikers