The Board of Directors of the Burney Water District (BWD) held their Regular Meeting on Thursday evening June 16, at the BWD Office Board Room, 20222 Hudson Street. Following statements from customers and a lengthy discussion regarding proposed increases in rates, the Board voted 2 to 1 to delay their vote on the increases.

There were two reasons for the delay. The first was to allow time to provide documents that had been requested by Dr. Tim Kersten under the Public Records Act. The second was to examine ways in which the Board could more effectively explain to customers the reasons why the increase was deemed necessary and to develop a better way to get feedback from the community on the proposed increases.

District Manager Willie Rodriguez said that he would have the documents requested by Dr. Kersten within a few days. A special public meeting to discuss communication with customers was scheduled for 6:30 p.m. at the Water Board District Office on June 21, 2016. The vote on the rate increases was rescheduled for the next Regular Board Meeting on July 21.

Eleven people from the public attended the meeting filling all but two chairs in the room. District Manager Rodriguez said that that was the most people who had attended one of their meetings during his tenure.

The meeting did not begin at 6:30 p.m. as scheduled because a quorum was not present. Board President Jim Hamlin and Board Member Tanya Taylor were not able to attend. A quorum was reached when Board Member Fred Ryness arrived and the meeting was called to order by Roger Borkey at 6:46 p.m.

Before the business at hand was addressed there was an opportunity for public speakers to raise issues for consideration at a later date. Alex Colvin (author of this article) requested that the board consider establishing a Parks and Recreation district under the Water Board’s authority to insure the effective maintenance of Lions, Washburn, and Bailey Parks as well as the community pool in perpetuity.

The board then approved several items of consent and moved on to the public hearing on the proposed revisions to rates, fees, and charges for water and sewer enterprises.

The first speaker was a man who pays for water for four properties. He did not come to protest the rate hikes. In fact, he thanked the Board for their work to ensure clean water for the area and then went on to suggest ways in which he felt that statewide water management could  be improved and asked the Board to pass those suggestions on to state legislators.

The next speaker, Mr. Ben Bowden, came to protest the hikes. In the past year, he had seen his water bill rise from $50 to $90. He vehemently expressed his frustration at the way price increases for this basic necessity are decided upon, imposed, and enforced by the police power of the state. He said that he felt that the process for protest was inadequate because most people, even if they oppose the rate increases, simply comply because they feel powerless and uninformed. 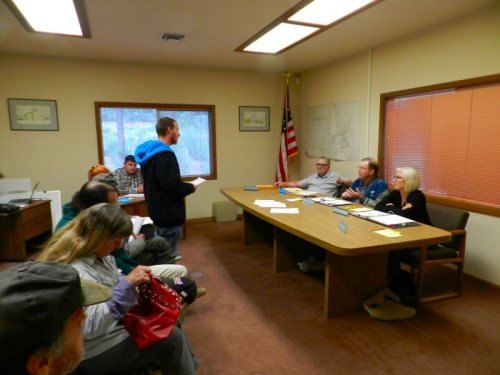 Members of the Board responded that they are simply trying to fulfill their responsibility to provide safe and clean water and maintain the long-term fiscal stability of the district. Board member Roger Borkey affirmed that if a customer couldn’t pay their bill, their water would be shut off and the shut off would be enforced by the Sheriff’s Office.

Mr. Bowden expressed that his feeling was that the Water Board didn’t really care what he thought because they had already determined what they were going to do and they knew that a majority of customers would not take the time to write a written protest.

The next speaker was Dr. Tim Kersten. Dr. Kersten said that he believed that the frustration expressed by Mr. Bowden was not unique. Dr. Kersten understood that the Board was trying to do their job with due diligence but he believed that there were problems with the process by which they did it. He explained that many of the working poor and people on fixed incomes are hard hit by these rate increases. He argued that “tacit consent” (if customers do not actively file a written protest, they are assumed to be in favor of the increase) is not a good way for BWD to create a satisfactory contract with their customers.

Dr. Kersten suggested that a better way would be to provide checkboxes on their bills so they could indicate whether they approved of or protested the rate increase. He also asked that a delay on the vote be granted until more information about the reasons for the increase be provided to the public.

For the most part, the members of the Board and the District Manager listened attentively and sympathetically to the critique offered by Dr. Kersten. Board Manager Rodriguez acknowledged that the system of written protests was based on tacit consent.

In the course of the discussion, Ms. Chandler also acknowledged that Board Members were the elected representatives of the people delegated with the task of managing Burney’s water. She said that the community has a responsibility to be informed and to participate in public discussion. Yet she also supported Dr. Kersten’s comments that the Board could improve its modes of communication and feedback in order to alleviate the feelings of frustration and powerlessness that many feel.

Mr. Rodrigues described three aspects of the Board’s responsibility. Their primary responsibility is to provide clean and safe water and to ensure the financial viability of the district. In doing so they must also comply with state guidelines and mandates. Finally, the board needs to communicate with it’s customers in a way that maximizes customer awareness and satisfaction. He expressed a desire to find ways to do so more effectively.

This prompted Fred Ryness to explain how the sewer rates were assessed. Sewer rates for the year are determined based upon water usage during the winter months of January, February, and March when there is no outdoor ornamental watering.

Mr. Rodriquez expressed his sympathy and condolences on the passing of Mrs. Wilburn’s mother. He asked her to speak with him following the meeting so that he could examine her bill and make appropriate adjustments.

There were a number of other comments by the members of the public and over two hours of informative discussion by the board. Here are some of the issues addressed Thursday evening:

BWD currently provides water to just over 1300 customers. The number varies because people come and go. The district, originally organized in the 1940’s under the authority of Shasta County, now operates under the supervision of the Shasta County Local Area Formation Commission. Local Area Formation Districts (LAFCO) were established by the California legislature in 1963 to coordinate city, county, and special district activities. The relationship between special districts, state, county and local districts is fairly complicated.

BWD has to balance their budget. They have to make ends meet. In order to develop a long term plan, they commissioned several studies. The proposed budget for 2016 and the rate increases are based on these studies.

The difference between water rates and sewage rates results from the cost associated with each. BWD pumps water from the aquifer 300 feet beneath the surface to a water tower. Continuous running of the pump is not required. To process sewage a pump must run continuously to the sewage treatment area. So the energy cost for sewage is higher than the rate for water.

Other costs include equipment, maintenance, and replacement. In the past BWD did not always adjust the rates for depreciation.

Income is provided by a combination of rates, loans, and grants. Whether BWD qualifies for loans or grants depends to some degree on the rates charged. BWD also has to comply with state guidelines and mandates. If they do not, the State of California can take over the authority of the water district.

For example, during the past two years, Governor Brown mandated limiting ornamental outside watering to two days a week. Even though our water levels remained constant because we are blessed with an aquifer full of good water, BWD had to comply. If they had not, the state would have taken control of the district.

The situation is even more complicated. Other LAFCO’s in the state may object or take certain kinds of action if they think that people in our district are “wasting water.”

By the way, the BWD will vote at the next meeting to lift the two-day a week restriction because the governor has ruled that it is no longer necessary for small rural districts such as ours.

Another question raised is whether there will be any discount for low-income customers similar to discounts made available by PG&E. Mr. Rodriquez said it isn’t possible because our customer base is so small. Discounts would need to be balanced by raising the rates of others.

Mr. Rodriguez did comment later however to say that he is pursuing a survey of local BWD customers to determine the average household income. Accessibility to state grants is indexed to the average income of districts, so our district could qualify for interest-free loans or grants that would decrease the cost to the district.

BWD is in a tough spot. Already this year, they are $69,000 in the red. The Board  and the district manager are determined to meet the challenges they face. They want to provide good water, get the  district on a sound financial footing, and maintain the integrity of the local district. They also want to increase public awareness and customer satisfaction. The Board welcomes feedback, questions, suggestions, etc. and encourages people to come to the public meetings.

The public hearing on the rate increase lasted more that two hours. By 9:30 the Board had voted to delay the vote on rate increases. They also voted to delay the vote on rescinding mandatory restrictions on outdoor watering until the state document regarding the mandate was on hand and could be viewed by board members. Then there was further discussion to schedule the special meeting on June 21.

Following the votes, the Board heard reports from Pool Manager Stephanie McQuade and the District Manager Willie Rodriquez.

Ms. McQuade, also recorded the entire meeting. The recording of the meeting is available to anyone in the public who wants to hear the proceedings.

A lot of information concerning the issues discussed at the meeting and more is available at www.burneywater.org.