On June 21, 2016, Shasta County Health and Human Services (HHSA) held a second meeting at the Veterans Hall in Burney to provide information about proposed housing for adults with serious mental illnesses and/or children with serious emotional disturbances and their families. More than one hundred people attended. 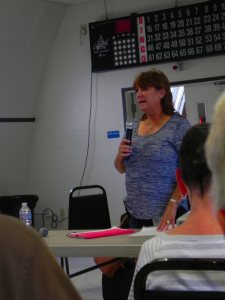 The meeting, which began at 5:30 p.m.. was moderated by Jamie Hannigan, MHSA Coordinator for Shasta County HHSA. Hannigan briefly summarized the meeting that had been held at the Vets Hall on May 24 and presented a seven-page document listing 28 questions that had been raised by participants with responses from HHSA. This document was made available to everyone who attended.

Hannigan also encouraged people to participate in the planning and development of the project by signing up as community stakeholders.

The meeting’s agenda consisted of presentations by representatives from Hill Country Health and Wellness Center, The Circle of Friends, Northern Valley Catholic Social Services, and Shasta County Housing and Community Action Programs, as well as testimonies by people who had benefited from the Full Service Partnership with mental health providers, followed by an extended session of questions and answers.

All counties in California are required to have an FSP. Their purpose is to promote recovery and stability for people suffering from mental health disorders. Permanent supportive housing is one of the basic needs for people seeking to achieve wellness.

In order to participate in the Full Service Partnership Program, a person must have been diagnosed with a serious mental illness. Diagnosed mental illnesses may include severe depression, suicidal tendencies, bi-polar or other disorders that impair a person’s ability to function effectively in society.

For a person with a mental illness to become a Full Service Partner, they must be willing to participate in therapy and support programs. The comprehensive program involves not only care from medical and mental health providers, but also support and involvement from family, friends, peers, and the community. The goal is for the person to achieve stability, to manage their own life, and to participate in the community in a healthy and productive way.

After describing the many services offered and the FSP program, Allan introduced Kristen McChristian, a Full Service Partner who has been working with Hill Country.

Kristen McChristian tells about her journey to recovery and wellness

McChristian has suffered from a number of conditions including extreme anxiety disorder, PTSD, and multi-personality disorder. She is a survivor of rape and sexual abuse. She was previously a user of alcohol and drugs including methamphetamines and heroine.

Kristin shared how through participation in the Full Service Partnership program she had been able to get her life in order. She has been drug and alcohol free for seven years. The audience applauded her achievement.

The next speaker was Lynn Erickson, Director of Circle of Friends Wellness Center. 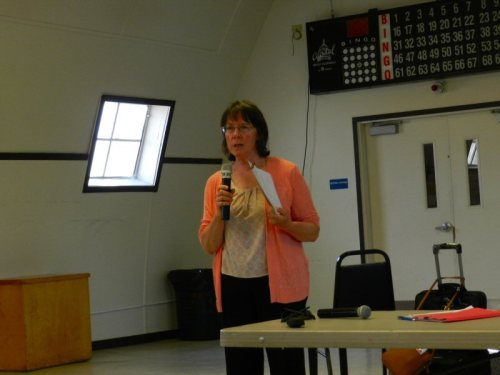 Circle of Friends Wellness Center is located at the corner of Hwy 299 and Tamarack Ave. The center provides a loving environment where people can meet, share, and support each other. People coping with mental illness or recovery often suffer from isolation and stigma. Many of the activities are participant-directed. As an example, Erickson told about a lady who had learned beading and then taught this skill to others. Members of the Circle of Friends also volunteer time to community projects such as Burney Beautification.

After Erickson gave a brief overview of the center’s activities, she introduced two people who have been part of the wellness center’s programs, Kimberly Davis and James Herington.

In telling the story of challenges that she has faced with depression, suicide, and anxiety, and the benefits from the wellness center, Davis told the audience that members of Circle of Friends have raised and donated over $10,000 to various charities in Burney. 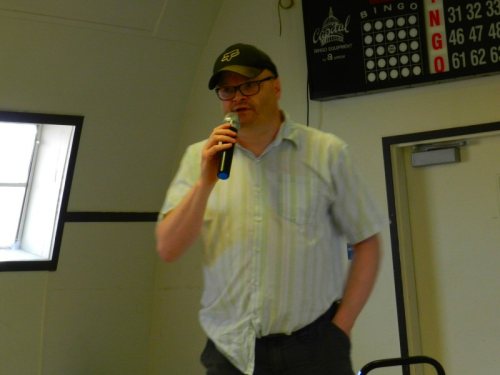 James Herington shares his experience with Circle of Friends

Herington told the story of how he first heard about Circle of Friends riding on the bus down to Redding. When he eventually came to the center he discovered not just a wellness center but a community of love that he now feels is “family.”

The next two speakers talked about the “project parameters.” Bobbi Sawtelle, housing Director for Northern Valley Catholic Social Service said that they were hoping to find a property that they could rehabilitate to create 8-10 living units. Whether the units would be two-bedroom or one-bedroom would depend on the property. One bedroom units would be for single adults. Two-bedroom units could possibly be suitable for emotionally disturbed children and their families.

Sawtelle also said they would like to find a property that is close to services such as grocery and other stores and bus transportation.

Richard Kuhns, Director of Shasta County Housing and Community Action Programs briefly explained some of the funding sources. There is $750,000 available from MHSA for purchase and rehabilitation of the property. Funds for maintenance of the property will come primarily from rents. Rents will be subsidized by Shasta County Housing Vouchers. The amount of each subsidy will depend upon the income of each individual resident. Another source of income for the program is Community Development Grants.

All of the presentations were finished by about 6:30 p.m. Afterwards, there was a period of question and answer. Fortunately, the VFW provided two wireless microphones.  Ron Harshman from the VFW and Hannigan swiftly deployed the mics so that questions from the audience and answers from the speakers could be heard by everyone.

Many Burney residents still have questions and reservations about the project.

The first question came from a man sitting in the front row who told a tragic story about the death of his daughter living in senior housing on Roff Way. His question concerned what guarantees there were that quality management would be maintained and that residents would be properly supervised over the long term, especially if funding were cut.

Allan expressed her sympathy to the questioner and said that in working with Full Service Partners she could not envision such a tragedy occurring under this program. Not only would the Burney project have a trained resident manager, but each individual resident would have a case worker who would be meeting with them and checking on them on a regular basis depending on the level of their need. Furthermore, participation in the FSP includes regular participation in a support group such as Circle of Friends, and appointments with their healthcare providers and therapists.

Funding for programs under MHSA is derived from a 1% tax on incomes over one million dollars which was passed by statewide referendum on Proposition 63 in 2004.

Next a woman named Heather in the back of the room suggested that the project also use alternative medicines, gardening, arts and creativity and other activities that contribute to mental health.

Hannigan, Davis, and other speakers welcomed her suggestions and said that many of these activities have already been incorporated into their programs. Community gardening in Redding was cited as an example.

Then another lady raised a question about one of the items on the question and answer document that Hannigan mentioned in the beginning of the meeting. The document stated that “there are an estimated 289 individuals living in the Intermountain Area with a diagnosed serious mental illness.”

The woman said she questioned whether there were adequate resources to care for these people in the Intermountain area.

There was some confusion about this question. Donnell Ewert, Director of Health and Human Services took one of the microphones and said that he thought this question was one of a general category regarding the notion that the County wanted to move mental health patients to the Intermountain area. The County does not.

The woman became somewhat frustrated and said that that was not her question. She was asking if adequate care could be provided for 289 people. Would it not perhaps be better if they were cared for in Redding.

Hannigan tried to clarify several points. The number 289 in the document is just an estimate based upon the overall census of the Intermountain area and a general government statistic that 4.1% of the adult population has been diagnosed with a serious mental illness.

Furthermore, the proposed housing program is not being designed to serve everyone in the Intermountain Area. It will only serve 10 to 14 people who qualify for the program. The program seeks to serve them in their local area where they have the support of friends and family as well as the community health services.

Next, Janet Chandler asked about the rent subsidies. She had come from the May 24 meeting with the understanding that 75% of the funding would come from rent subsidies. Kuhns said that in that meeting he has used an approximate figure of 65% but that actually the level of subsidy varied with each resident depending upon their income. The subsidy for a person with no income could be 100%. Rents for people with higher income could be less than 65%. If a person became self-sufficient and made a high enough income, he or she might, according to the formula, pay the entire rent. Kuhns offered to meet with Chandler to explain the formula.

Next, Fred Hawkins, Superintendent of the Fall River Joint Unified School District stood up in the audience and said that he felt that the schools should be included in the discussion of mental health issues in the area. Everyone agreed. 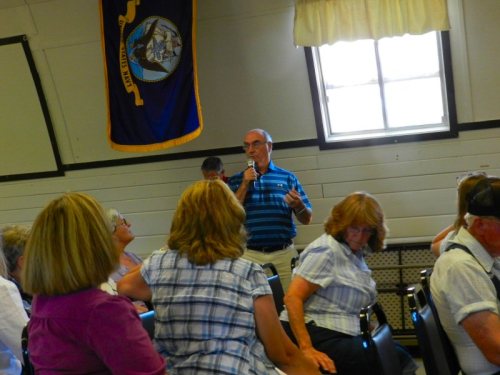 Patrick Moriarty, former director of Circle of Friends spoke briefly about his experiences in the mental health field.

Jim Erickson got up and spoke about his experience picking up a woman with mental health issues on Hwy 299 who needed help and the value of services and a support network in the area.

Finally, Mary Rickert spoke briefly about her work with mental health organizations including the National Alliance On Mental Illness and made an appeal that people support the project in Burney.

Hannigan then brought the meeting to a close. She asked everyone to write down any additional questions on a 3×5 index card and turn them in. The questions and answers will be posted on the MHSA website. Hannigan said there will be more community meetings in the future. As the project unfolds there will obviously be more details and issues to be clarified and discussed.

The meeting ended just before 7:30.