Rep. Doug LaMalfa, Congressman for California’s 1st Congressional District, was the guest speaker at the June 30 lunch meeting of the Rotary Club of Burney-Fall River held at Gepetto’s Pizza in Burney. 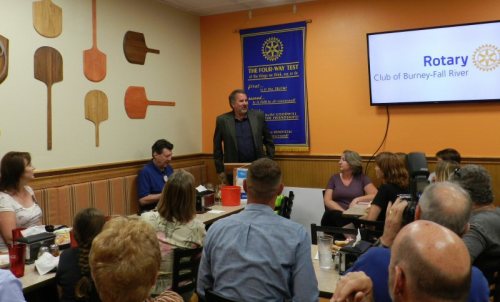 LaMalfa speaking to Rotarians in Burney

President Bob Jehn presided over the last meeting his term. The new 2016-17 President will be Bill Campbell.

Before LaMalfa spoke, Jehn awarded scholarships to several local students. Rotary set up the scholarship fund to help outstanding students who would like to pursue careers in the Intermountain area in the future. The program is for adult students pursuing continuing education as graduating high school students. Jim Billo was the chairman of the scholarship program. 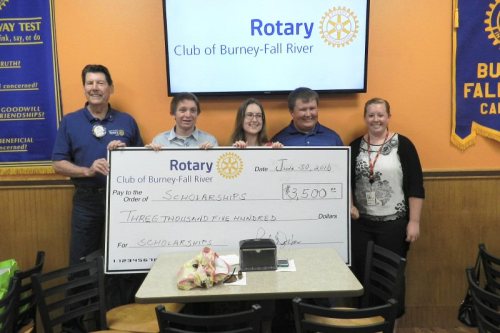 LaMalfa began his talk by introducing two of his staff members who had driven up with him for the meeting, Erin Ryan, District Representative from Redding, and Shane Starr, an enthusiastic new aide from the Oroville office. Throughout his talk. LaMalfa emphasized that he wanted to keep in touch with constituents on issues of importance to the district and that there is “no problem too small that we don’t care.”

He briefly discussed two bills currently before Congress. One is a Mental Health Bill and the second is a bill concerning rate hikes on broadband. He also discussed the Fall River Bridge, saying that it should not take so long for planning and bureaucracy.

In discussing forest fires. LaMalfa compared the response of private owners of land and federal agencies. He said that there are several stages in restoring the forest including salvage and replanting. Salvage, harvesting the usable timber and selling it, brings in revenue that helps with the replanting and restoration of the forest. It needs to be done in a timely manner or the wood loses it’s value. According to LaMalfa, six months for salvage is optimum, one year is okay, but after a year and a half, the wood is no longer valuable.

LaMalfa said that the area of the Fountain fire is starting to look good. He surmised that the ownership of the land is private and that is why there was a quicker response. He contrasted that with a 2014 fire on Forest Service land in Siskiyou County where the salvage has still not been done. Postponing the harvesting of usable wood costs the taxpayers money.

LaMalfa’s criticism of federal land management extended to both the Forest Service and the Bureau of Land Management (BLM). Laws and increased funding do not necessarily produce the desired result. The Forest Service has increased the percentage of its funding for fire prevention but the forests are more vulnerable than before. A law was passed in 2001 to reduce the number of wild horses and donkeys on federal lands. Yet the number has continued to increase. According to LaMalfa, “BLM is not following the law.”

This led to a broader critique by the Congressman that we are creating a culture of lawlessness. People no longer want to follow the rules.

LaMalfa used the recent Democratic sit-in in the House of Representatives over gun legislation as an example. Congress has rules. The Democrats were unable to get the votes they needed to pass the legislation or get the 218 votes necessary for a discharge vote to bring it to a general vote on the House floor, so they engaged in the sit-in to create a media event.

LaMalfa said he opposed the “no-fly no-buy” regulation because it would have had no effect on incidents that occurred in San Bernadino or Orlando. According to Lamalfa, 98% of people on the no-fly list live outside the US.

In staging their sit-in the Democrats were in violation of several House Rules. LaMalfa used the metaphor of drivers who didn’t like the rules in a NASCAR race crashing into cars and creating a demolition derby.

“We have a demolition derby in the House of Representaves.” Lamalfa said.

This led to the first question. Why weren’t the people engaged in the sit-in escorted from the House?

LaMalfa’s answer was quite interesting. For the Sergeant-at-Arms to do so would have required the direction of the Speaker of the House. The media, also in violation of House Rules, was covering the sit-in. The protesters had positioned Rep, John Lewis, a respected African-American civil rights leader from the 1960’s, in the center of the sit-in hoping to create a situation broadcasting Lewis and other protesters being dragged from the house floor by law-enforcement.

According to LaMalfa, Speaker Ryan did not want the protestors to score political points by creating a media circus that would be reminiscent of the police brutality of the 60’s.

There was only time for one more question.

Asked about the upcoming GOP convention and Donald Trump, LaMalfa said that he would not be going to the convention.

“I have no need to go to Cleveland in July.”

Regarding Donald Trump, he said that voters have chosen Trump as the Republican Presidential nominee. LaMalfa initially supported Governor Scott Walker from Wisconsin and then Senator Marco Rubio, but voters chose otherwise.

LaMalfa said that he was able to meet with Trump for a very short time when Trump visited Redding. In their brief conversation, LaMalfa said, Trump was very polite and seemed honest and sincere. When LaMalfa told Trump that his main areas of expertise were agriculture, natural resources, and forestry, Trump invited him ot come see him in the White House when he was elected.

Time for the meeting had run out. Jehn brought the meeting to an end. LaMalfa concluded the gathering with an elegant appeal to the young people present not to lose faith in our political process and to get involved. He pressed the point that we are a republic with elected representatives that needs that participation of its citizens.

“I am just a placeholder in the great history of our nation.” the Congressman said.