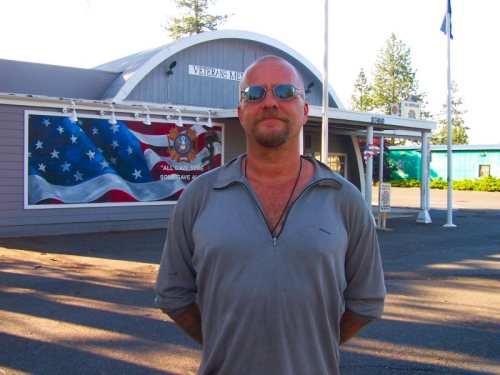 In the morning Linda and I had gone to WOLA and heard Pastor Cory give an inspirational sermon on suffering.

Later, we had gone to the craft fair behind US Bank, examined the wares, and talked with many of the crafters and vendors: wood carvers, pipe and jewelry makers, the unique McKay brothers with their assortment of wood, pinecone, stone and manure items, an author of a children’s book about a pink Rhino… and more. It was a great craft show. Evalee Nelson and Irene and others were manning the Soroptomist Booth.

It was hot. We were a little worn out by the weekend. I wanted to jump in a pool of cold water. Linda and I went home to eat and rest.

There was supposed to be one more event for Burney Basin Days: a jam session for local musicians at the Vets Hall from 6-8 p.m. I had told both Nancy Bobo and Cindy Martin that I would be there.

So Linda and I were at home relaxing before the jam. I was about to jump in the small pool in my backyard when the doorbell rang.

It was my friend from McArthur, Trapper. He wanted to know when the music was. Trapper plays fiddle and loves to jam. He’s been trapping the Fall River for forty years and playing music since the 1960’s.

We sat in the backyard, talking about trapping, Fish and Game, the Bureau of Land Management, and how the West has changed. Trapper had bought a book, Outlaw: The True Story of Claude Dallas at a yard sale for fifty cents. The book is about Claude Dallas, a man who came west to live like an old time cowboy or mountain man and ended up killing two game wardens.

We talked for three hours. I went in the pool and swam. Ahhhh!

At six o’clock, Trapper, Linda and I were at the Vet’s Hall for the jam. The door was locked. No one was there. The bar was open. The woman who was tending bar said that Nancy Bobo was supposed to come at 6 p.m. We told her that we would wait in front and the bartender told us to tell Nancy to come round back for the key when she arrived.

Trapper and I waited by the door. Linda went and sat on the bench by Hwy 299. After about ten minutes we joined her.

So there we were. Three old folks sitting on the bench watching the world go by. Still no one came.

I thought, “We are like the three crows in Dumbo, sitting on the fence cackling.”

Trapper got restless and ran over to Burney Lodging to see if Nancy was there. They told him that she had worked a 12-hour shift and gone home.

Time went by. No one came, neither Nancy nor any other musicians.

I enjoyed sitting there. Everything was peaceful; Burney looked beautiful in the evening.

Then, just after 6:30, I saw a man hiking into town with a big red back pack.

The man stopped, gave us a thumbs-up, and came towards us across the street.

“Are you hiking the PCT?” I asked.

“Yes I am,” he answered in an accent I couldn’t quite determine.

“Where are you from?” I inquired.

Linda got really excited. She loves Ireland and she likes to have her picture taken with big Irishmen.

The man’s name is Donaju and he comes from Holywood, Northern Ireland. Linda was interested to know that they had “Hollywood” in Irelend. Donaju explained that there were two, one in Northern Ireland and one in Southern, but the name was spelled differently than the American because it meant “Holy Wood.”

Trapper, being a trapper, was interested to know what kind of furry critters they had in Ireland. He asked if they had martins. At first, Donaju wasn’t sure what he meant. Trapper explained that they were like a weasel.

“Oh,” said Donaju, “Yes, I believe we have them. We have people named Martin too and I guess they must have gotten their name from somewhere.”

Trapper told him that he trapped animals for a living.

“The only thing that I know how to trap is terrorists,” responded Donaju.

“Yeah,” said Donaju with a smile on his face, “You know, like an Arab.”

Subsequently, Donaju told us that he was a Royal Irish Ranger who had done eleven tours in Afghanistan. He had also served in a number of other hot spots. He said that he is hiking the Pacific Crest Trail for the Wounded Warriors. The Royal Irish Rangers merged with other regiments in 1992 to form the Royal Irish Regiment which serves as a branch of the British Army.

Donaju told us that he joined the Irish Rangers in 1978, which he described as the “year the British Empire ended.” He explained that it was during those years that the last of the British colonies became independent and the empire was superseded by the British Commonwealth.

He also told us that now that Britain had voted to leave the European Union, they would no longer be European.

Trapper was perplexed. “You’re no longer going to be European?” he queried, “What are you going to be, Yanks?”

“No,” said Donaju, “It seems that we will go back to being British.”

He also opined that Scotland will never leave the United Kingdom because the Bank of Scotland knows that if they were to do so, The Bank of England would take all of their money.

We were getting an education. Later, Donaju told us that, in addition to serving in the military, he had also lectured on Medieval History at Oxford University.

Donaju was headed to the Dollar store for a few supplies and then needed a ride back to the trail. Time was moving on toward 7 p.m. now so it seemed pretty certain that there would be no jam sesssion.

We all lamented that there was no music because it turns out that Donaju is also a left-handed Irish fiddler.

Trapper left. Linda and I took Donaju to the Dollar Store. He emerged from the store with 2 bags full of 2-liter bottles of soda.

Donaju is the first PCT hiker I have met so far this year who has hiked the entire trail from Mexico. Others started further north or skipped parts of Sierra’s south of Lake Tahoe. He had some trail friends who had texted him that they were kayaking on Lake Britton and he was hoping to catch up with them. But he wanted to go back to the trail head on 299 because he didn’t want to miss any of the trail.

Driving out, we learned of one unfortunate incident that had occurred on our visitor’s journey. Somewhere along the line, at one of his stops, he had been robbed. They took all of his tobacco and $400. He had spent the all but a few cents of the cash he had left on his soda supplies. He had traveler’s checks but the stores he had been to wouldn’t cash them. The banks wouldn’t be opened till Tuesday because of “some kind of holiday.”

However, he was picking up a new credit card that had been mailed to Mt Shasta and the banks would be opened by the time he got there. The only thing he didn’t have was tobacco , so I gave him a small box of filtered cigars to tide him over till he got to Mt. Shasta.

When we got to the trailhead, he unloaded his pack and supplies. Unfortunately, one of the soda bottles snagged on a saw in the back of the Jeep so we both got sprayed with soda. Fortunately he was able do save most of it and put it in a large soda cup that he carried.

So that was it. Donaju, the Irish Ranger, headed up the PCT toward Burney Falls State Park hoping to find his kayaking friends. For us, encountering him had been a pleasant exclamation point at the end of Burney Basin Days.

What can I say? The PCT is fantastic and you meet lots of interesting people.