Fisher couldn’t catch a fish – at least not yet…

After attending the Hat Creek Volunteer Fire Department Deep Pit Barbeque, Linda and I decided to detour a bit on our way home. It was late in the afternoon, so I knew that many of early morning fishermen would have ended their day, but I was curious to see how the fishing was going in Cassel.

We turned off 89 onto Cassel Road. There were lots of cars parked by the property on the right side of the road at Rising River. I expected to see a lot of people down by the water, but the river scene was quiet and beautiful. 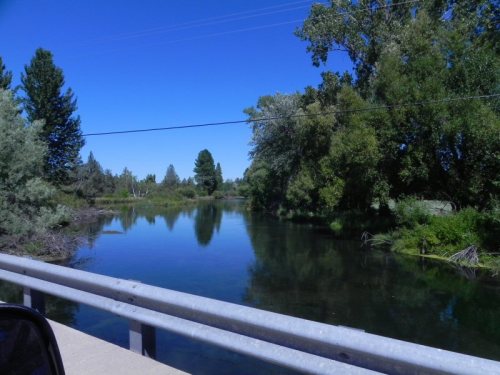 We drove on into Cassel and over the bridge. Two men were fishing on the ramp on the left side of the canal inside the gate. I’d never seen that before either. Where the new fence was by the post office one boy was holding his pole up over the fence fishing.

That’s where I met Bill Fisher. He was getting ready to load his fishing equipment into the back of his friend’s bright red pickup truck.

I pulled up and rolled down my window.

“How do you like the enhanced fencing?” I asked.

He said that this was his first time here. He had flown over from Hawaii to meet his friend Larry Thompson from Reno to come up to Cassel to fish. He asked if I fished. I told him that mostly I liked to drive around and take pictures because I write for Pit River Country.

He asked me if I would like to take a picture of the “worst fisherman in the world.” So I obliged him. 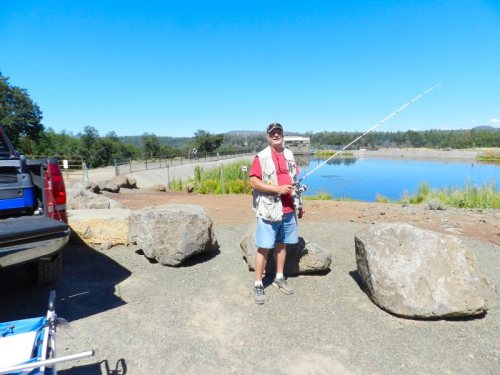 Now, this was where the story gets more interesting. Earlier in the afternoon, Bill and Larry had driven to the bridge in Cassel. It was crowded with fishermen. There was no place to fish. People were lined up and down the stream.

So apparently, people are undaunted by the new fence. Though some may be disgruntled, people adapt in various ways. Fences and regulations are one of the challenges that must be met in order to catch fish.

They came up to Cassel Forebay. Bill said that when they arrived there were 20 people fishing around the pond, both inside and outside of the fence. He and his friend Larry started out fishing on the bank by the parking area because the walkway was crowded.

They were using worms and salmon eggs for bait. They didn’t get any bites but they watched a couple up on the walkway pull out ten really big fish, probably five to seven pounders. Bill said they were pulling out a fish every two minutes.

So when the couple had caught their limit and were ready to leave, Bill and Larry went to take their spot. The man had used Powerbait. After he left, they tried their worms and salmon eggs – no bites.

“I’m going to get my picture in the newspaper!” Bill told him.

Larry was a very kind gentleman who said he had come up to Cassel numerous times. He liked to come here with his grandchildren to fish.

He was using a walker with a seat on it. One of the reasons he liked to come to Cassel was because of the easy access. However, he wasn’t disturbed by the new fences. In his opinion, it is a reasonable safety measure.

There is considerable discussion on this amongst people in the community who fish. Many people think that while it may be “reasonable” it doesn’t make sense.

Be that as it may, neither Bill nor Larry were perturbed in the least that they hadn’t caught a fish. They were enjoying the experience and the beauty.

Nor had they given up hope. They were planning on staying in Burney for two more days. The next morning they were going to get out earlier to try again.

So Sunday morning, on my way to the NorCal Road Gypsies car show, I stopped in at Burney Sporting goods. They told me that Bill Fisher and Larry Thompson had just been in to buy some green PowerBait eggs.

Then, on Monday at 11 a.m. I saw Larry parking his red truck in front of Ace Hardware. I pulled over to get an update.

Larry was all smiles. “I caught my limit!” he exclaimed.

They had gotten up at 4 a.m. and were out on the Forebay just after sunrise. Larry caught five fish and Bill caught two. Bill said that that was his personal best! Hooray!

The day before they had caught two fish using the PowerBait.

Bill also said that it was difficult for Larry to make his way through the gravel on the way to walkway and that it would be more accessible if there were a little paved pathway connecting the parking lot to the walkway.

They were planning to get up at 4 a.m. again on Tuesday for one more day of fishing.

As fate would have it, I ran into Bill and Larry again at Anna’s Country Kitchen on Tuesday morning. They had gotten out at 5:30 a.m. and were fishing just after sunrise. By 6 a.m. Bill had caught three fish. A new personal record. Before this fishing trip, he had never caught a trout.

After 6, Bill’s luck ran out and Larry’s began. By 8:30 Larry had caught 4 nice trout. This time they had a little trick. They used night crawlers, but injected the worms with a little bit of water using a syringe so that the worms would float.

Larry had found the process of infusing a worm amusing because he is also a nurse. After retiring from the military in the 1990’s, he had gone to the University of Texas to study nursing. Not only has he worked as a nurse in Oklahoma and Hawaii, he also spent fourteen months in the Philippines assisting in a birthing clinic.

I was amazed. I told Bill he should write a book.

The two fishermen finished their breakfast and didn’t want to keep the fish waiting. Since they hadn’t yet caught their limit they were off for one last fishing fling in Bridge Park.

On Wednesday, they will be headed back to Reno. Once there, Bill will get his truck and trailer and head to Oklahoma to visit family. On September 14, this dynamic duo will meet up again in San Diego to attend the 32nd Annual West Coast Drill Instructors Reunion.

It was an honor to meet these two wonderful men. I’m happy that they enjoyed themselves so much in Pit River Country.