Old Station was bustling July 30  as people lined up in a steady stream from 12-5 p.m. for a delicious meal at 35th Annual Old Station Volunteer Fire Department chicken barbecue. More than 400 people were served. 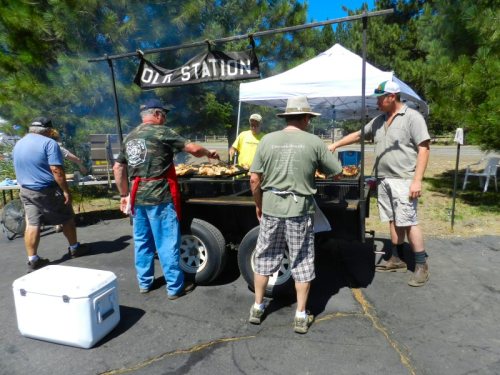 Volunteers cooking up the chicken

The popular summer event was held at the Old Station Volunteer Fire Station on Highway 44/89 next to JJ’s restaurant.

Old Station’s official 2010 census is only 51 people but locals were joined by supporters from throughout the Intermountain area, summer residents, campers at the numerous nearby campgrounds on Hat Creek, tourists visiting Lassen Park, fishermen, day trippers from Redding and other cities throughout Northern California, as well as dozens of Pacific Crest Trail hikers who had stopped in Old Station to rest and resupply. Some visitors had come from as far away as New York, New Mexico, Texas, Illinois, Arizona, Washington State, England, and Israel.

The meal was huge! For $10, each person got a half a chicken, baked beans, potato salad, green salad, pasta, and garlic bread followed by ice cream with strawberries or homemade cookies for dessert. 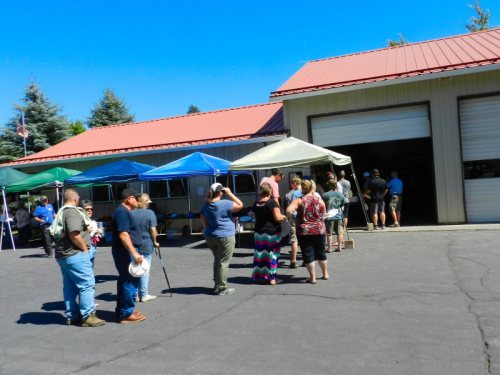 Lining up for the chicken

Along with the barbecue, there was a craft fair with ten vendors selling home made goat soap, hand forged metal sculptures and patio furniture, jewelry, paintings, photo art, and hand-made crafts. Each vendor donated one of their hand made creations for auction to support the fire department. 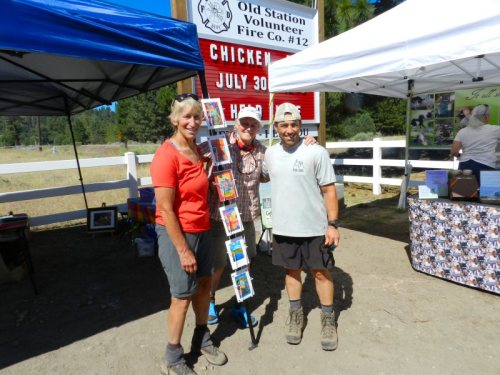 There was also a raffle. All proceeds went to support the Old Station Volunteer Fire Department. Elaine Lanier from The Fire Chiefs Association of Shasta County also had a booth encouraging people to become volunteer firefighters.

John Becker from the Old Station Volunteer Fire Department said, “We would like to thank the community and everyone who participated for supporting our chicken fundraiser and raffle!”