I left Old Station and drove toward Burney. Desert Steve was just a little way up the road hitching toward Burney Falls. I pulled over and told him I could give him a ride. 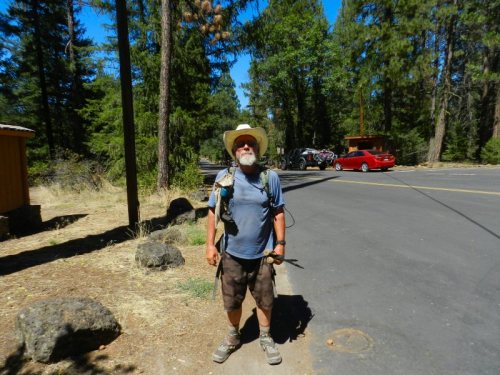 “Desert Steve” is the trail name of Steve Hedland from Henderson, Nevada. He is 63 years old. He is hiking the entire 2600 miles from Campo to Canada.

One of the reasons he is hiking the trail is to set an example for his grandchildren. He wants to show them that if they set a goal, plan, and persevere, then they can do it.

He doesn’t want to hear them say “It’s too hard!”

He would prefer that they think, “If Grandpa can hike the PCT, then I can do this.”

Another experience that inspired him to hike the PCT is that he hiked the Ruby Crest Trail in Northeastern Nevada. That 40 mile trek along the crest of the Ruby Mountains gave him a taste of wilderness hiking and he wanted more.

Steve is posting a beautiful photo journal of his PCT hike on WordPress.

Steve said that one of the best times he had so far was the time that he got to take a break and rest at home. Steve lives near Las Vegas. When he hiked to the end of the desert and found the area south of the Sierras full of hikers waiting for the snow to melt, he decided not to sit around for weeks. He was not that far from home. He made his way to a town where his wife could pick him up and drove home with her to rest until the trail traffic began to move again.

Steve said that he had lost 20 pounds hiking through the desert. “I ate and ate and ate,” he said. He rested for 12 days. Then he went back to the trail with his wife and camped and hiked with her for the first day.

They had to skip one section of the trail. It was closed because of the Chimney Fire. Then, rested and recuperated he continued on through the High Sierras, Gold Country, Feather River Country, into the southern Cascades to Old Station.

He was skipping the stretch from Old Station to Burney Falls because of the heat, and also because he was low on food and had a resupply waiting for him at Burney Falls State Park.

And that’s where I dropped him off.

I drove back to Old Station to get Linda, pack up our booth and head home.

The group of hikers that had been resting in Old Station had left to begin their night time hike across Hat Creek Rim. I was a little concerned for them. We were only two days from a new moon. The stars would be bright but the land would be dark. There are a lot of rattlesnakes and the lava rock can be tricky to hike over, especially in the dark.