On Tuesday, August 23, from 5:30 – 7:15 p.m. Mayers Memorial Hospital District held a meeting at the Lions Club in McArthur to explain their decision to discontinue Obstetric Services.

The meeting was facilitated by Valerie Lakey, Director of Public Relations for Mayers Memorial Hospital District. The hall was packed with more than 200 people in attendance. An information packet was provided to all who attended. 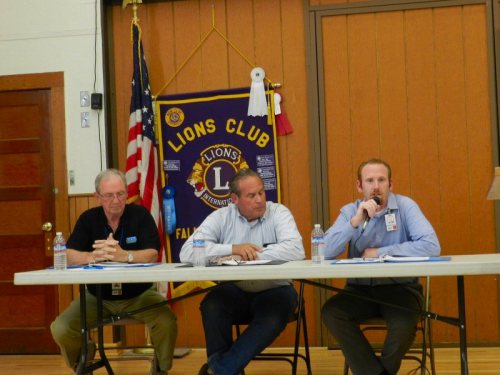 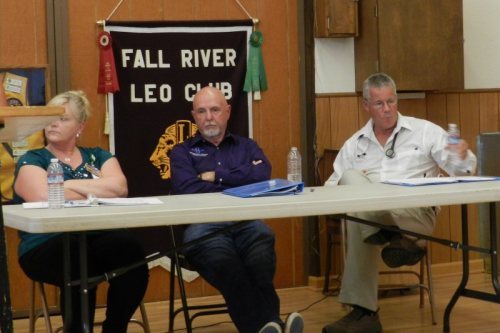 After an opening statement by Louis Ward, brief  comments by the panel, and a summary of answers to some of the common questions regarding the closure, there was and extended period of question and answer.

Lakey listens to a question

The decision to end OB services was a management decision fully supported by the Board. It was not a decision arrived at quickly or easily.

The California Department of Healthcare Services mandates that all California Hospitals that have an obstetrical service on their licensure provide 24 hour a day, 7 days a week, 365 days a year active service. Such service requires a doctor on call, nurses trained in OB delivery, and anesthetics.

The hospital has struggled for years to adequately meet these requirements. It has become increasingly difficult to recruit experienced trained OB nurses largely due to the fact that Mayers delivers the least number of babies of any hospital in the state of California. Last year the OB department delivered only 54 babies.

No one nurse could be on duty 24/7, so to fully staff the facility each nurse would only deliver a small number of babies each year. The management at Mayers has tried many strategies to recruit experienced OB nurses. They have offered above market-rate pay and financial incentives, but still have been unable to due so.

It has also been difficult to recruit OB/GYNs & Family Practice Physicians.

On the other hand, the question and answer session made clear that many in the community were surprised and disgruntled by the decision. Discontinuing OB services means that women will need to go to Redding to deliver their babes.

Many in the community were unaware of the difficulties the hospital was having maintaining the standards mandated by the state. Those who were aware assumed that the hospital would continue to maintain the service by meeting their needs with stop gap measures.

Several people asked why there was not more advance notice and a public meeting before hand to get community input. Questions were also raised as to whether doctors, nurses, expectant mothers, and other interested parties were aware that that the board was going to take action to end OB services at their July meeting. People wanted to know if there was still a chance to change the decision or a possibility that OB services could again be offered in the future.

Among those who were critical of the decision were family practitioner Dr. Daniel Dahle and OB Department Manager Holly Green. Several expectant mothers were also in the audience.

CEO Ward answered many of the questions. The decision to end services on September 15 is final. There is a possibility that services could be resumed, but not in the near future. 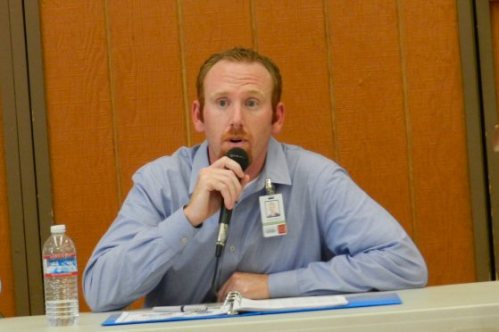 Ward responding to a question

It was stressed that this was not a financial decision. The hospital has improved it’s cash balance and decreased it’s debt. The decision was a management decision based primarily on the difficulty of recruiting adequate staff to meet state requirements.

Questions were also raised concerning the construction of a new building. This is necessary because of state requirements regarding seismic stability.

Lakey ended the meeting by telling the audience that anyone who had further questions should contact the hospital and make an appointment so their questions could be fully answered.