Some people remember Raymond H. Berry. More and more, lots of people don’t. People who moved here or were born after 1970, may not know who he was. The community swimming pool in Burney is named after him and many people wonder why and who he was. 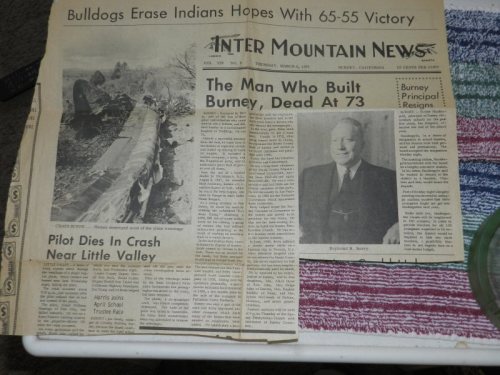 Even those who do know what role Ray Berry played in Burney from the 1940’s into the 70’s don’t know much about his life before he moved here.

Now a British author, Kate Moore, has just published a book about a milestone legal case in which Raymond Berry plays a major role : The Radium Girls: They Paid with Their Lives. The Final Fight Was for Justice.

The book is about teen-age girls who worked in a watch-dial painting factory run by United Radium Corporation. A number of them developed horrible symptoms. Some died as a result of radium poisoning. It took awhile to determine the cause and then some of the girls wanted to file suit against the company, but no lawyer would take the case.

Then one courageous, perservering young lady went to see a young lawyer, Raymond H. Berry at his law firm in Newark, New Jersey.

It was the young lady’s last shot at achieving justice. Berry who was a fresh, quick-witted lawyer not long graduated from Yale Law School took the case.

By winning a substantial settlement for several of the young women, Berry set a precedent for occupational tort law. It was a landmark case.

Several years later, Berry became the attorney for the Starr family who owned timberland in the Burney area. He came out to Burney and helped to incorporate Scott Lumber Company and served as it’s general manager for several decades. He also helped to start the Chamber of Commerce, to negotiate the building of a railroad from McCloud to Burney, and to begin Shasta County Bank which later merged with Tri Counties bank.

I just thought I would share a little glimpse of my Grandpa Ray’s life before he came to Burney. He was in the right place at the right time when an opportunity came to him to champion a just cause and he has earned a place in history.