More than 150 people came to the Burney Veterans Hall Saturday evening October 22 to attend the Burney Chamber of Commerce 14th Annual Fall Fling. Many came dressed as cartoon characters and the hall was adorned with comic pop-ups celebrating the theme “Sunday Funnies.”

Welcome to the Fall Fling

Jill Barnett, President of the Burney Chamber of Commerce explained the purpose of the event. The Fall Fling is the largest fundraiser for the Burney Chamber. All of the money raised goes to projects that promote commerce in Burney. Last year’s Fall Fling raised $10,000.

April Bertain George won the award for Friendliest and Most Helpful Employee. 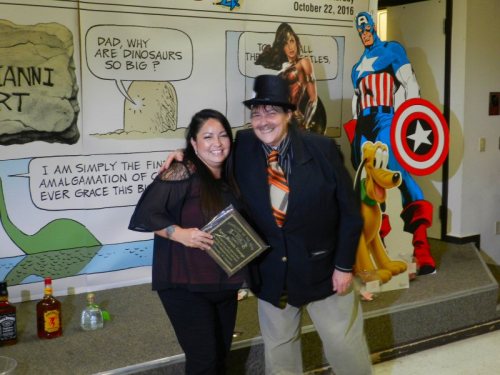 April George honored as Friendliest and Most Helpful Employee

Ron Mosher was named Volunteer of the Year. He is not pictured because he was unable to attend,

Burney Boosters was awarded Organization of the Year. Kathy Urlie accepted the award on their behalf.

Debbie Krieg won Best Female Costume. She and her husband, Alex, came dressed as Mr. and Mrs. Cat in the Hat.

Cats in the Hat Alex and Debbie Krieg

The dinner was served by Burney High Leadership Class under the supervision of Student Activities Director Melissa Madden.

There was a cake auction. The highest bidder on each cake had a chance to win a beautiful pine picnic table with benches. Likewise, those who bid highest for a variety of spirits had a chance to win one of three guns, including two rifles and a shotgun.

There was also a silent auction for a variety of items.