Whitewater Recreation on the Pit One Reach

About 60 whitewater adventurers came to Pit River Country the weekend of October 29-30 for whitewater recreation on the Pit One Reach. Kayakers and rafters came from as far away as Alaska and Wyoming. Ages of participants ranged from 14 years old to 68.

Headed down the Pit photo by Christine O’Connor

Every year, whitewater flows are required as part of PG&E’s license conditions for the Pit 1 Hydroelectric Project. The Pit 1 Reach is the 6.5-mile portion of the Pit River that extends from PG&E’s Pit 1 Forebay in Fall River Mills to the Pit 1 Powerhouse.

Group by the rock photo by Christine O’Connor

On October 24, PG&E increased flows from about 200 cubic feet per second (cfs) to 800 to 900 cfs creating Class IV and V rapids . This provides a particularly exciting opportunity for kayakers and rafters because the section of the river includes Pit River Falls.

Heading over the falls photo by Christine O’Connor

Some kayakers go over the falls. Some choose to ride the chute parallel to the falls. In either case it is an exciting ride. The stretch ends at the Bureau of Land Management Campground at Pit 1.

Over the falls photo by Christine O’Connor

This was the second whitewater recreation weekend of the year on Pit 1 reach. The first event had been October 8-9. The scheduling of the event is a cooperative effort of PG&E, BLM and American Whitewater.

Most of the participants come on Saturday and camp overnight at the BLM  campground to  continue their weekend of fun. On Saturday night many of the campers enjoyed a combination Halloween Octoberfest celebration. 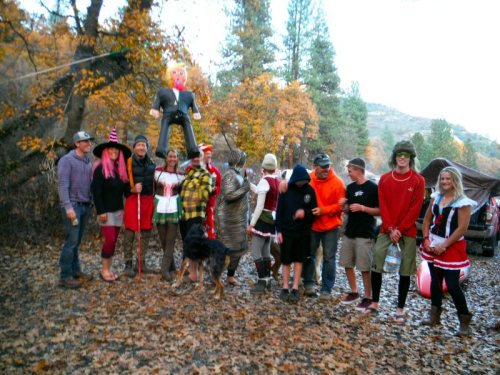 I wasn’t able to make the first event. Nor was I able to get there on Saturday the 29. Sunday was my last chance.

When my wife Linda and I got out of church it was pouring rain. We drove to the campground to interview some of the kayakers. The first group I met consisted of  Karen Guibault from Chico, Jami Rains from Sacramento, Sara Strader and Mary Elliot from Verdi, Nevada, Bruce Taylor from Reno, and Stephanie Viselli from Carson City and Christine O’Connor who had taken many wonderful pictures of the group’s escapades.

Kayakers from Nevada and Northern California

Undaunted by the rain, they had finished their ride for the day and were enjoying a feast of leftovers from the celebration that they had had the night before. They kindly gave me a bag full of sauerkraut.

When I asked them all if they had a quote, they said, “Thanks to PG&E, BLM, and AW!”

After a joyful chat, I headed down to the swimming hole where I met another group: Patrick Baird and Bird Sewett from White Salmon Washington, Brad Gossett from Alaska, and Riley Gardner from Jackson Hole Wyoming.

Then I saw two more trudging up from the river carrying their kayaks.

Joyful rafters after a great ride

And last but not least 14 year old Nathan with his kayak on his back.

14 year-old Nathan carrying his kayak back from the Pit

They were done for the day. I was getting soaked and Linda was waiting in the car. There were a few rafters still on the river but they weren’t expected to arrive soon. Linda and I headed home grateful that we had been able to meet these wonderful whitewater enthusiasts  of all ages and share just a taste of their excitement.

Many thanks to Christine O’Connor for the wonderful action photos.