The Burney Lions Club hosted their annual party for residents with special needs on Tuesday December 13. The festivities began with a delicious spaghetti banquet at 11:30 a.m.

Then, just after noon, Santa arrived to present each special needs person with a beautifully wrapped gift with their name on it. 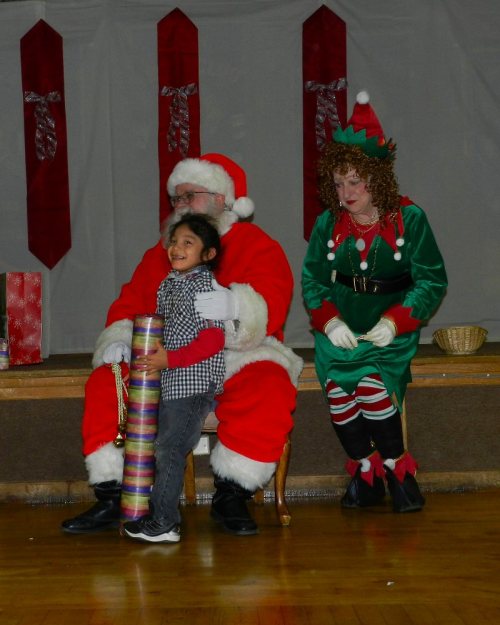 The Burney Lions have been holding this Christmas season event for over 25 years. This year Lion Jim Lane was the chairman of the committee that organized the event. Jim and his wife Barbara spent more than a month selecting and buying presents for 46 different  individuals with special needs.

Jimmy brought a lot of joy to the occasion

Altogether, 62 spaghetti dinners were served to special needs guests and their family members and caregivers. Some were not able to attend but care providers will make sure that they receive their gifts.

Barbara Lane pulled the gifts out from under the tree and called the names. Lioness Elf Ann Wilburn assisted Santa as he joyfully interacted with each person who received a present.

Santa gets a hug

To raise money for the gifts, the Lions collected plastic and aluminum cans throughout the year. Funds were also supplemented by cash donations from the community.

After the gifts were given out, many of the celebrants came up to have their photo taken with Santa.

The meal was prepared by Ron Edwards with the help of Kurt Taylor, Richard Arndt and George Whitfield. In addition to spaghetti, a delicious acorn squash was also served. This is a decades long tradition. Whatever the main course, each year acorn squash is part of the meal. For dessert, there was cookies and cupcakes and chocolates. Lions, including Walt Libal, and Lioness elves, including Joan Hawthorne, helped to serve the meal.

As the event finished, the Lions and Lionesses also joined Santa for a group photo.

Jim Lane  and Larry Hawthorne said, “This is part of our job to show our love in service to the community. There are a lot of children and adults in our community with special needs. The least  we can do is throw them a Christmas party.”

Joy to the World!