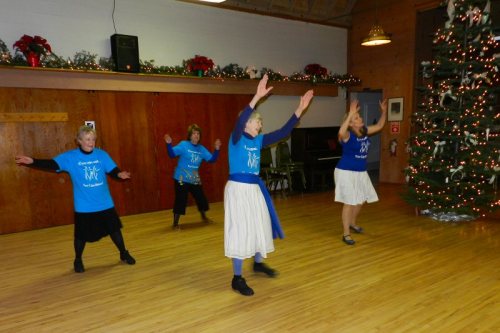 The first dance was T’filat.

The Second was Jacob’s Ladder

Burney members of the Redding International Folk Dancers meet every Wednesday afternoon at Burney Presbyterian Church at 4:30 p.m. to learn and practice folk dances from all over the world. Classes are open to everyone: men, women, and children.

Several of the members have gone to study at the Stockton Folk Dance Camp directed by Enka Goldmun.

The Israeli dancing was a fitting prologue to the week’s Sunday afternoon Bible study led by Rev. Penni Elaine.

Rev. Elaine gave a short synopsis of the history of ancient Israel and Judea from the time of the Babylonian captivity up to the advent of Christ. Her survey included the return of the captives and rebuilding of the temple under the Achaemenid Empire founded by Cyrus the Great, the conquest of the Levant by Alexander, the succeeding rule by the Ptolomiac dynasty of Egypt and the Seleucid Empire, the Maccabean Revolt and the Hasmonean dynasty, and finally the establishment  of Herodian Kingdom as a client state of Rome.

This brief but brilliant survey provided an historical backdrop for the birth of Jesus. The last book of the Hebrew Prophets is Malachi. From the time of Malachi to the ministry of John the Baptist there were no prophets. This Intertestamental Period lasted approximately 400 years and is often referred to by Protestant scholars as the 400 Silent Years. Much of it is concurrent with the Second Temple Period in Jewish history.

During this period of “silence” God did not speak through prophets to major political leaders. Rev. Elaine, however, affirmed that if we listen during periods of silence, God may reveal his Word and guide us personally.

The text of the Bible study was Luke 1: 26-38, in which the angel Gabriel appeared to Mary and revealed the coming birth of Jesus. One can say that this is a prime example of private personal revelation.

The study group explored what it must have been like for young Mary to have had an angel appear and tell her that she would conceive and give birth to the Messiah.

Afterwards, we all enjoyed a delicious potato soup prepared by Kevin Fletcher. I think I can safely say that this was a profound and joyful love feast.

The Bible study at Burney Presbetyrian Church will resume on the first day of the new year at 4 p.m. Everyone is welcome.