Each year, residents, businesses, and organizations of the Fall River Valley and surrounding areas join together to create a wonderful Mountain Jubilee. It is a delightful display of Inter-Mountain culture and activities organized by the Inter-Mountain Fair Heritage Foundation.

One of the events this year was the Hunger Games. A few weeks ago, Linda and I got a message that Delbert Howard Building was sponsoring a Honorary Burney Mayor’s Race team.

We sent out the challenge to the mayors candidates. We needed four candidates to compete on the team. Ralph Freitas, who is running for Honorary Mayor raising funds for Make A Wish Foundation (Shasta County) said that he would be willing to run. Beth Allison was organizing the race, so Linda called her and she invited Linda and I to participate. She got a fourth volunteer, a young man named Kyle, to be our fourth participant.

So, in the 100 degree heat on Saturday, June 24, Linda and I headed over to the Inter-Mountain fairgrounds in McArthur. People were socializing, music was playing and a group of young ladies were playing egg roulette on the lawn. The girls were breaking eggs on their heads. Some of the eggs were raw, some were hard boiled.

We didn’t see Beth right away so we headed into the Ingram Hall where it was cooler. Shortly, Ralph joined us.

While we waited we watched some wonderful dancing by the youth of Fall River. 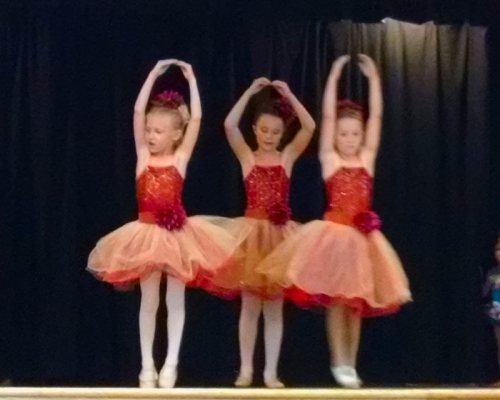 Song and dance from the Newsies 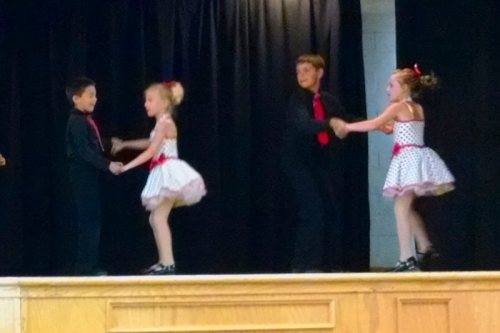 It was a really great performance.

After the show we went outside to the lawn. The egg-smashing was finished and the Hunger Games were about to begin. Four teams competed. Beth gave each of the competitors a t-shirt: red, yellow, blue, and pink. Judges were chosen.

We competed in a variety of events combining physical activity and food. The first was a board race in which three of us had to walk together on two boards. We did pretty well in the first race and only fell off the boards a few times. Ralph performed well gulping down a fruit salad.

However, when it came my turn to eat a dry burrito our team began to slip. My mouth was dry and it took me eons to chew and swallow the burrito. By the time I finished the other teams were already well ahead. Next Kyle built a lego construction while Linda aced down a pizza. Next, I blew bubbles though a hoop and once again, very slowly, chewed up a maple bar and then blew up a balloon than that I had to pop on another contestant. Then we boarded our way back to the finish line where Ralph finished off a spicy cup of Bloody Mary mix.

Our team came in last, primarily because I am the slowest chewer in Pit River Country. Still it was lots of fun. The emcee invited Ralph to say a few words and he talked about his race for Mayor and invited everyone to come to the opening event of Burney Basin Days for the ice cream social on Thursday night.

Free ice cream. I think I can eat ice cream a lot faster than I can a burrito.

Every year the Mountain Jubilee has been a fun action filled event leading up to the Inter-Mountain Fair.

Thank you so much to the organizers and Delbert Howard Building for giving me a taste of the Mountain Jubilee.