This year’s Burney Basin Days began Thursday evening June 29 at Burney High School. The opening event combined an Ice Cream Social, the Kid Fit Family Track and Field Event, and the announcement of the winner of the 2017 Honorary Mayor’s Race.

Hundreds of kids, parents, volunteers, residents, and visitors to Burney turned out to share in the fun, refreshment and excitement.

Winner of the under five 100 yard dash

Flying through the air 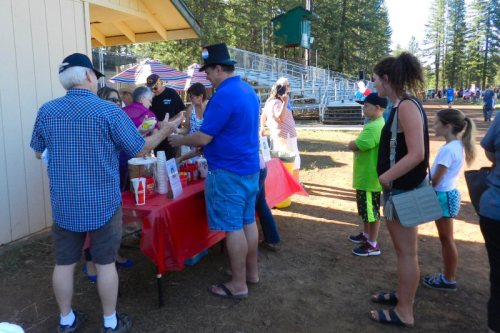 Lining up for ice cream

Beautifully designed 2017 Burney Basin Days T-Shirts were also for sale. If you didn’t get one yet, don’t worry they will be available at the parade, the fireworks, and the Burney Chamber office.

At 7 o’clock, the sports events took an intermission as the crowd gathered around the bleachers to hear the announcement of the winner of the 2017 Honorary Mayor’s Race.

The Honorary Mayors race is a fun and creative way to raise money for non-profit charities. Whoever raises the most money wins. Money raised will be divided between the candidates chosen charities and the Burney Chamber of Commerce.

Burney Chamber of Commerce Office Manager Jen Luck introduced all of the candidates and the charities that they were raising money for.

The new 2017 Honorary Mayor of Burney is Jill Daugherty who campaigned for Burney Citizen’s Patrol! 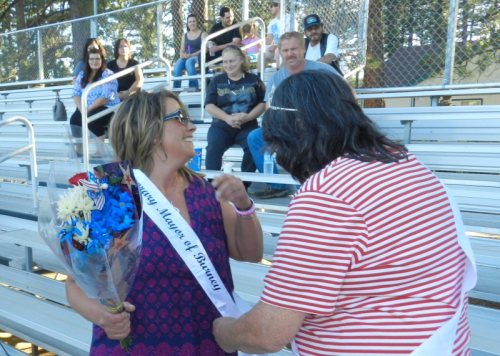 It was a close race. Ms. Luck announced that the seven candidates had raised a total of more that $5,500. All of the candidates and their organizations were wonderful. Each candidate was a joy. Ralph Frietas came in a very close second and Mary Unterreiner was not far behind. God bless them all and God bless the people who generously contributed to their campaigns.

Shaylene,  Ralph, and Mary each spoke briefly expressing their gratitude and hopes for Burney. Pictures were taken and then it was back to the ice cream and the races.

Thanks to all of the volunteers and participants who worked together to make the start of Burney Basin Days such a fun filled family event. Also, special thanks to the Pit River Casino for sponsoring Kid Fit Summer 2017. Happy Burney Basin Days! Here’s a schedule of more events to come. Enjoy them all.