Last week I posted an article about the 4K for Cancer bicyclists stopping in Burney on their ride from the east coast to San Francisco.

I limited the account to a short third person report about their trip and the work of the Ulman Cancer Fund to generate support for young adults and their loved ones impacted by cancer.

What I didn’t include in the article was my delightfully surprising personal experience interacting with the young riders.

It had been a busy day. Earlier, I had gone to the Veterans  Hall to cover the United Bikers of Northern California fundraising run for One SAFE Place. Also, our daughter Dena and her boyfriend Jim were visiting from Maryland and that afternoon we went to Burney Falls and hiked on the trail. ‘

When we returned, as they were relaxing in the back yard, I raced over to Gepetto’s to meet the 4K riders.

I was wearing a bright orange Baltimore Orioles t-shirt. I entered Gepetto’s and went to the entrance to the meeting room where the riders were enjoying salad and pizza. I was greeted by a young man named Meldrick Umahon.

I asked him to please take me to their leader.

“I am one of the group leaders,” he replied.

He brought me into the room and introduced me to the other group leader, a young lady named Sara Brown from Fredericksburg, Virginia. 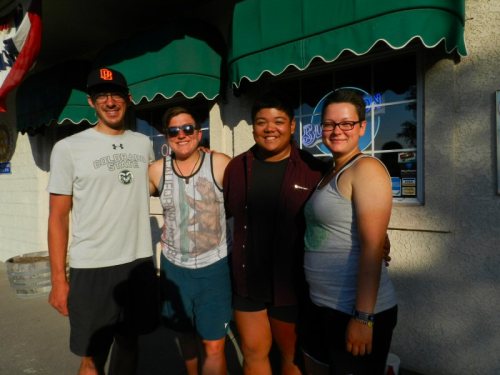 As we entered the room, several of the young adults looked up, saw my t-shirt and exclaimed, “Baltimore Orioles!” “Go O’s!”

It kind of surprised me. I thought that the riders had begun their cross-country tour in New York, but Meldrick explained to me that they had actually begun in Baltimore and Baltimore was in fact the headquarters of the Ulman Foundation.

I told them that I had lived in and around Baltimore for over 30 years. So as I interviewed the two leaders several riders from the Baltimore area joined us at the table and we shared Baltimore experiences.

The conversation then took and interesting turn when I asked Meldrick where his home town of Livingston, New Jersey was located. He asked me if I new where Newark, New Jersey was.

My grandfather Ray Berry had a law office in New Jersey that I had visited with him in the 1960’s.

It turns out the college that Meldrick attended in New Jersey was a law college, so I asked him if he had ever heard of the Radium Girls case. Meldrick got really excited. 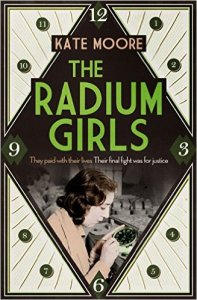 “The book the Radium Girls was required reading for all students one year at my college!” He informed me.

When I told him that the lawyer who represented the girls in the case was my grandfather, Raymond Berry, he was astounded.

“Not only that,” he continued, “I was a musical theatre major, and the same year that we read the book we also performed the play Radium Girls!”

When the non-fiction book Radium Girls was first published in England, I received a copy of the book from the author Kate Moore and was able to suggest a few corrections. Since that time, the American edition came out. In April 2017 Kate Moore did an interview with NPR  and then a book tour in the US.

Ms. Moore invited my daughter Hana Lyn, who lives in Baltimore, to come to the opening of the tour at a bookstore in Manhattan. My grandfather’s nephew, John Berry, also came down from Connecticut to attend and the three of them went out for drinks afterwards.

John Berry attended school in Burney as a child. His father, also John Berry, came to Burney shortly after my grandfather to work for Scott Lumber Company in the 1940’s and 50’s. In addition to his work as a lawyer he also did the architectural design for the Burney Presbyterian Church.

So the publication of Radium Girls resulted in a sort of family reunion. When the younger John Berry contacted me he explained that his father and my grandfather were very competitive and parted ways. His father returned to the east coast. That was all before I first came to Burney in 1956.

Anyway, Meldrick was very interested to meet the grandson of the lawyer whose case he had read about and helped to dramatize recently in college.

I was also able to let him know that a movie is being produced about the Radium Girls. Just recently, I was contacted by one of the co-directors, Virginia Mohler for information about Ray Berry’s family.

It is interesting to note that the movie is not based on Kate Moore’s book. Work on both projects had their genesis about the same time after the play came out but proceeded independently. The movie will be historical fiction. The lawyer in the case will be “loosely based” upon Ray Berry. In the movie his name is Henry Berry.

The filming is finished and final production is progress. The film will be introduced at various film festivals next year and hopefully will make its way to movie theatres.

It is fascinating that this 1928 law case, which holds an important place in the history of both the field of health physics and the labor rights movement, is now gaining such wide interest. The Radium Girls case helped to establish the right of individual workers to sue for damages from corporations due to labor abuse.

Also, how ironic it is that my grandfather, a staunch conservative who served on the Central Committee of the state Republican Party when Ronald Reagan was Governor of California, is going down in history as a seminal figure in the development of labor law. As general manager of Scott Lumber Company he participated in intense negotiations and fierce battles with local unions and the AFL-CIO.

He was complex. On the one hand, he was a strong advocate of right to work laws, while at the same time he was very compassionate and deeply concerned about the welfare of individual workers.

On another note, when I mentioned to Meldrick that my mother died of cancer, he asked her name. He explained that they dedicated each day of their ride to a cancer victim and said that the next day they would dedicate their ride to the memory of Alice B. Stone. I was very touched.

Our conversation ended. As we went out to shoot a group picture, another delightful young lady, Autumn Kramer, came up to ask me if I was really from Baltimore. She lives in Catonsville, about a mile away from where my daughter Hana Lyn lives. We took the pictures and did a special cheer for Baltimore.

While everyone was boarding the vans to go to Burney Falls, Autumn came back to shake my hand and thank me for coming to meet them.

I assured her that the pleasure was mine.