“The number one rule of the PCT,” Songbird assured me, “is ‘hike your own hike.'”

He went on to explain, however, that hikers do form friendly “trail families.”

“When you meet other hikers on the trail with whom your goals align, it is wonderful to trek together because shared memories are deeper and richer than solo memories. Be the best friend you can, stay fluid and flexible,” he said, “but don’t generate expectations.”

Songbird is from Tukerton, New Jersey and has been hiking north on the Pacific Crest Trail for more than three months. I met him in the parking lot of the Dollar General along with three members of his PCT trail family: Phoenix from Santa Cruz; Pickles from Philadelphia; and Whoopie from San Jose. 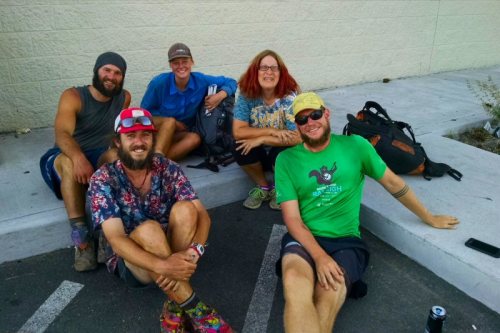 I had brought my wife Linda to the store to buy a few items. I didn’t see the hikers at first, because a car was blocking my view, but when the car pulled out, there were two sitting on the curb by their packs chatting.

Then Missy Lyons drove up into the empty parking spot between me and the hikers. She said “hi” as she got out and immediately went over and began cheerfully asking them questions.

They told her that they were thru hikers, had hiked about 1400 miles from the Mexican border, and were on their way to Canada. When they began to ask some questions about local trail conditions and places to stay, she said, “That man over there knows a lot about …”

So I figured that was my cue and went out to meet them. I mentioned the Burney Mountain Guest Ranch, which they had passed, Burney Lodging, and camping at Burney Falls Park. They actually were anxious to get a few more miles in before dark so I asked them if they would like a ride. They said they would appreciate a ride out to the trail head. As we talked two more hikers came out of the store.

Songbird, Phoenix, and Pickles wanted a ride to the trailhead. Whoopie from San Jose decided that he wanted to stay in town for awhile and take in a meal at McDonald’s. Phoenix still had shopping to do, so the trio told me they would wait for me at the Dollar General while I took Linda home to unload our own “resupply.”

When I returned, Phoenix was still shopping so I sat down and we passed the time in conversation.

Pickles from Philadelphia said the hike was part hiking and part thinking and reflecting. Then he also acknowledged that it was also part learning not to think. Urban life is very busy and we are thinking all the time.

Pickles said, “When I get back to the city, I want to take time to get out of the city into nature so I can just wander and refresh myself.”

He earned a degree in art therapy with a minor in art and has been working as an art therapist. His girlfriend in Pennsylvania is going back to school to finish her education. Pickles said that as he hiked he has realized that rather than doing therapy, he wants to devote himself to art.

I told him that I painted with acrylics and he pulled out his phone and googled some of my work. Then he showed me an image of one of his paintings, an urban scene with a fascinating blend of split complementary colors mixed with text expressing his unique voice.

“People say you shouldn’t mix text with painting,” he said.

“But that’s what they think…” we both refrained simultaneously and laughed.

Pickles compared a lesson he had learned from art to hiking the trail.

“You just show up,” he said. “Sometimes the inspiration is there and sometimes it’s not, but you show up every day. Sometimes I don’t like hiking the trail because it is difficult or painful, but I show up every day. I don’t even necessarily think about the destination.”

In the meantime, Phoenix rejoined us from the store. She is attending University of California Santa Cruz studying premed.

“I have almost completed my undergraduate degree, but then the trail called,” she said, “so I will finish up when I complete the hike.”

She was planning to go on to study neurology, but now is thinking of going into cardiovascular work instead.

When she heard Pickles and I discussing art she said, “I would like to get back into art!”

We asked what kind of art she did and she said she was more realistic and had done a lot of drawing in the past.

One of the pleasures of the trail is that the hikers have such diverse talents.

As we prepared to load their packs into the Jeep, Songbird told me that they had a trail family of eight. He showed me two pictures: seven of them at the foot of Mt. Whitney and another somewhere further up the trail with all eight of them.

He and Phoenix had currently been hiking together for about three weeks. They hadn’t seen Pickles for several weeks but now they would be hiking together for awhile. Another of their family had hiked on ahead. One was resting at Burney Mountain Guest Lodge. Whoopie was at the McDonald’s and would hike solo but probably meet some of them again further up trail. Two others were somewhere else.

They had met earlier on the trail and become friends. Each one was hiking his own individual hike, but they stayed in touch by cell phone, followed each other’s progress on social media, reunited periodically, and hiked together when their pace and goals aligned.

On the drive to the trail head, I was silent as they checked their phones to receive messages and check trail conditions. One of their friends had just hiked 51 miles in 20 hours. He was far ahead.

Phoenix gasped. Two nineteen year old girls hiking the PCT had just been found dead in a rocky area of the bottom of a waterfall in Oregon. Everyone was deeply shocked and saddened by the tragedy and wondered how it had come to pass, but they took it in stride. They had faced some close calls themselves.

Songbird, Phoenix, and Pickles ready to head north to Canada

One response to “Songbird, Phoenix, Pickles, and Trail Families”