Vince Wall spoke to the Burney Chamber of Commerce on November 14 at Gepetto’s Pizza about the benefits of serving Pacific Crest Trail (PCT) hikers during the summer. 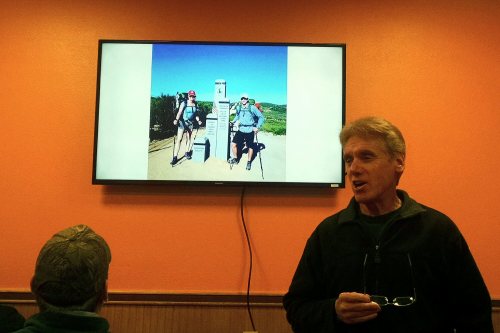 Vince Wall talks about PCT at Burney Chamber of Commerce

Wall worked with CAL FIRE for 30 years. He moved to Burney in 1997. Wall’s daughter Jenn and her boyfriend, Colton, hiked the trail this year. They began at the Mexican border April 15 and Jenn kept a 167 day blog of her journey called Jenn Hikes PCT.

The PCT extends  2,659 miles from the Mexican Border to Canada passing through the Southern California desert, the Sierras, and the Cascade Mountains. The trail crosses Highway 299 six miles west of Burney and also goes through McArthur Burney Falls State Park.

People who hike the whole trail are called thru-hikers. Most of them begin at Campo by the Mexican Border and hike north. Last year 4000 PCT permits were issued. In additions there are many day hikers and section hikers. The bulk of PCT hikers pass through the Intermountain Area in June and July. That means that thousands of hikers pass within 6 miles of Burney each year.

Wall explained that the PCT hike has become a social media event. The hikers and support organizations share information via cell phones and tablets as they traverse the trail. Life on the trail is simple, the hikers seek to maintain a steady pace of miles each day. They try to keep their packs light.

When they pass towns, they need to shower, resupply, eat, socialize and seek recreation. They pick up and ship packages at the post office and patronize markets, stores, restaurants and movie theatres. The also may need medical and dental services and sometimes they will rent motel rooms and take a break.

Though social media hikers share experiences and tell one another which towns are PCT friendly, where the best restaurants are, where they can get good camping sites, which businesses give discounts. where there are special events such as fireworks, etc.

Certain locations become “must see.” It is part of the trail culture. If you don’t go to a must see location you missed out.

Wall wants Burney to become better known as a PCT friendly town. Burney is ideally located just about half-way on the trail. Thousands of hikers pass through during the peak summer months after crossing the hot Hat Creek Ridge. Wall wants to organize a committee made up of representatives from the Chamber, Rotary, and other service organizations to explore ways to enhance services for PCT hikers in a way that would benefit both hikers and the town.

Jen Luck shared that this year’s Fall Fling had netted over $17,000.

Advertising opportunities for Chamber members and membership options were discussed.

The County has allocated $10,000 from the Occupancy Tax for grants for projects that will benefit tourism in the Intermountain Area. Deadline for application is December 1.

The Chamber is also exploring the idea of organizing a Blue Grass Festival if an appropriate location with necessary amenities is located.

It was announced that Jen Luck will resign as Burney Chamber Office Manager effective December 31, 2017.