The exercise was facilitated by Burney Fire Protection District Chief Monte Keady. Participants were organized into three groups according to their mission and function. The three groups were: 1) Fire, Hazmat, and Emergency Services; 2) Health Care Facilities; and 3) Support Services.

Chief Keady began the exercise by presenting a scenario of a mass causality event. The scenario involved a 40 vehicle fire on Hwy 299 in which 40 vehicles were involved. It included injuries and fatalities, a fire that began to spread, and a hazardous waste spill.

After briefing the audience on the situation, Keady asked each group to engage in a fifteen minute discussion about how they would respond to this emergency in the first 60-90 minutes.

Afterward, a representative from each group presented a summary of their discussion. In their summaries they discussed how they would plan, organize and staff each of their operations, set up a command structure and communications, organize relief efforts and transportation, provide services, set up shelters, etc. After each presentation there was an opportunity for question and answer and open discussion. 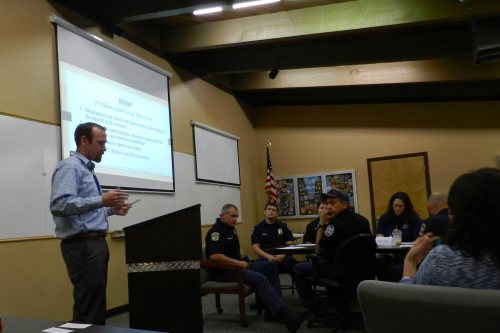 The rest of the agenda had two more scenario updates followed by group, intergroup, and open discussions. The last scenario update involved the close of the incident. The final event of the exercise was “Lessons learned,” a thirty minute period of shared reflection during which participants could share “Aha moments.”

The meeting also included breaks during which participants could share refreshments and talk on a less formal basis.

For more information about the Intermountain Preparedness Group, citizens can contact any of the participating agencies.