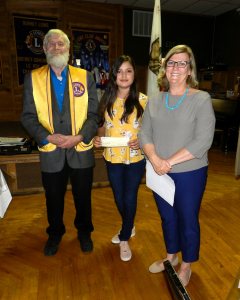 Eighth-grader Yesenia has a grade point average of 2.72. She is a member of the volleyball team. She is very good at math. She enjoys reading and drawing flowers and little pictures. She would like to try skydiving. Her goal is to become a doctor practicing family medicine.

Lion George Whitfield presented her with a check for $50 on behalf of the Burney Lions Club.

Senior Favian Jimenez, Yesenia’s older brother has a 3.0 grade point average. He is a member of Leo’s, Interact Club, Leadership Club, and mentoring. He played on the football and basketball teams and competed in track and field. He enjoys playing video games and spending time with friends and family. He would like to try scuba diving. After graduating, he plans to attend Shasta College and then pursue a degree in civil engineering.

Favian was unable to attend the ceremony because he was on a trip with CSF to see a play in Ashland. In his absence, Lion Whitfield presented a check from the Burney Lions for $100 to his sister and asked her to give it to him when he returned from his trip to Oregon.