The 4K for Cancer Team NY 2018 ran into Burney on Tuesday June 19. They came for a two-day rest stop hosted by the Word of Life Assembly of God Church (WOLA). Twenty-two young adults ranging in age from 18-25 are running from San Francisco to New York City to increase awareness and raise funds in the battle against cancer. 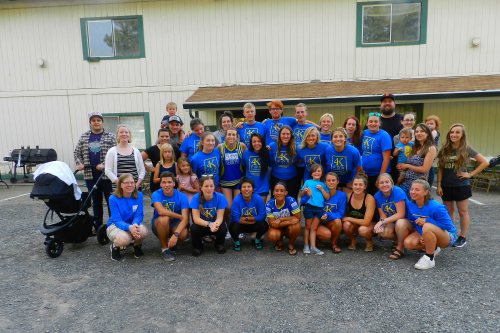 Team NY is one of three teams doing a 4000 mile run across the country beginning in San Francisco on June 17 and ending in Baltimore, Boston, and New York on Aug 4th. The run is sponsored by the Ulman Foundation. The focus is helping young people with cancer. They are building a nationwide network of support involving a wide range of charitable programs.

Kathy Newton from WOLA supervised the overall hospitality for the group during their stay, including two nights rest in the WOLA gym, a Tuesday night barbecue organized by Kaylynn Harper and prepared by the Encounter small group ministry, a visit to Burney Falls, breakfast with food provided by Anna’s Country Kitchen, and pizza dinner at Gepetto’s courtesy of owner Robert Moore.

Cooking up burgers by the gym

The program coordinator is Rebecca Eddy. Ms. Eddy, was raised in Eureka, Oregon and graduated from college in North Carolina, She currently lives in Baltimore where the Ulman Foundation has its headquarters.

Ms. Eddy said, “4K for Cancer hopes to unite communities in the battle against cancer making sure no one goes through this difficult time alone. Every participant has a ‘why for running.’ I wanted to run for my grandparents, uncle, great-aunt, and other family members and friends who have battled this terrible disease. I couldn’t control my family being impacted by cancer, but I could do something to make a difference and be there for others.”

Cheyenne Greenside and Courtney Schatz are team leaders. Courtney Schatz was raised in Roundup, Montana and now lives with her husband in Billings. She first learned about 4K when a team stayed at her church in Roundup.

She said, “I was inspired by the 4K bike teams that came through my hometown. I wanted to help. My parents have always taught me to help others in any way that I can so this experience is absolutely incredible.”

Montana Strummers sing “Running in the Mainstream of Love”

Mrs. Schatz is also a talented ukulele player. At the barbecue, she played and sang “How Far I’ll Go” from Moana with one of the children present. Then she teamed up with a local guitar player to form the Montana Strummers who performed “Running in the Mainstream of Love” featuring a wonderful ukulele solo.

Ms. Greenside lives in Seattle and is engaged to a young man serving in the army in Georgia. She recently graduated from college in Alaska. She explained that on June 17 the team ran from San Francisco to Yuba City. On the 18th they ran from Yuba City to Red Bluff, where they spent the night before continuing to Burney. After their stay in Burney, they will be running to Vale, Oregon and then on across the country.

Several of the runners expressed their appreciation of the beauty of the Intermountain area and their gratitude to the people of Burney for their friendliness. They said they hoped to return in the future.

Filed under Burney, Word of Life Assembly of God, youth