At their regular monthly meeting on Thursday July 19th The Burney Water District Board passed the 2018-2019 budget and discussed various local issues. 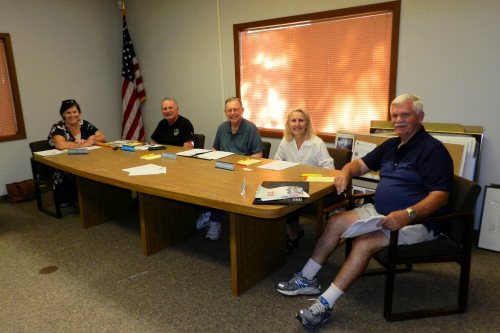 The main item on the agenda was review and passage of the 2018-2019 budget. The budget is divided into three areas: water, sewer, and pool.

District Manager Rodriquez said that revenues from water fees are down due to decreased water usage by BWD residential customers. It appears that the water use restrictions imposed during the drought have affected people’s use. After the restrictions were lifted, people have not raised their watering back to prior levels.

The budget was passed unanimously. The full budget is available for the public to review at the Burney Water District office.

During the Public Speakers portion of the meeting Lola Harris commented that she was concerned that the lawns at Washburn Park were not being watered or mowed. She was concerned about fire hazard and that the grass could die. Rodriquez explained that there were sprinkler problems that would be addressed and said that watering would begin within seven days.

The Board further discussed overall issues relating to parks in Burney including Washburn, Lions, and Bailey Parks. Rodriguez said that he attended a stakeholders meeting which included owners and users of the parks. Among those included were representatives of BWD, the Fall River Joint Unified School District, Tri County Community Network, the Lions Club, and Little League. This meeting was the first of a series of proposed meetings.

The purpose of the meetings will be to discuss the situation of the parks in Burney and to explore models and strategies for long-term maintenance and increased usage. It is hoped once the specific and concrete needs of the parks – including maintenance, manpower, insurance, etc. – are assessed, there will be a general town meeting at which individuals and organizations can discuss what they want, how best to achieve that, and what they are willing to do to help.

On other topics, Fred Ryness raised two issues. The first concerned pool fees for commercial BWD customers. Rodriguez explained how the fees were assessed by meter and that commercial customers could receive pool passes in return for fee payment.

During the Pool Manager’s Report, Rodriguez said that some customers had reported that rumors were going around that Burney Creek was polluted with high levels of E. coli bacteria and that BWD sewage overflows or spillage might be responsible. Rodriguez informed the board that he checked all possible locations at which overflow or spillage might occur and found no problem. As an additional precaution he had BWD water supply tested at several locations and found 0% E. coli. BWD water is safe and the sewage system is intact.

Rodriguez also said that he had heard of no reports of symptoms that may have been caused by E. coli from anyone swimming in the creek. He has no way of gauging the presence of E. coli in the water in Burney Creek and he doesn’t know the source of the rumor or their reliability. He said that he will check with other organizations such as the environmental officers of the Pit River Tribe to see if they have any information concerning the matter.

In her report, Stephanie McQuade said that pool attendance has been good this summer. There have been no major problems and what minor issues have arisen have been dealt with as they arose. Top Hat Energy has installed the solar panels, work on the interface with PG&E and necessary paperwork is progressing, so the solar electric system should be operational this August. Ms. McQuade said that the closing date for the pool this year would be August 31.