More than 40 people gathered at the Hill Country Clinic on Wednesday evening November 14 to participate in a healing drum circle sponsored by the Intermountain Teen Center.

The teens invited everyone in community and drew drummers and shakers ranging in age from a young toddler to senior citizens. 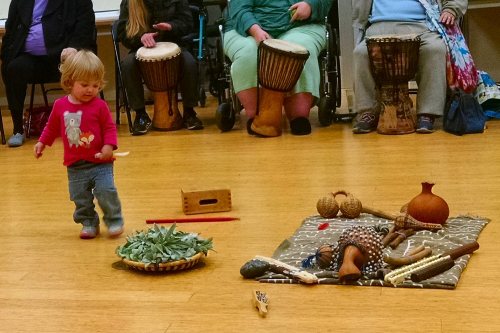 Circle of Friends in Burney brought a bus load and two vans and people came from Round Mountain, Montgomery Creek, and Big Bend. There were lots of drums, shakers, clacking sticks and other rhythm instruments so that everyone was able to participate.

Teen Center Program Coordinator Theresa Callahan welcomed everybody and then introduced experienced drummer Verena Compton, who facilitated the drum circle together with her husband Randy.

Verena began with a prayer in both German and English. She advised people that the African djembes were meant to be played with hands only. Then she began a beat and everyone joined in. After a period of time the drumming came to an end and then Verena or Randy began a new beat for another period. And so it was for one hour as people joined in with djembes, bongos, Native American drums, gourds, shakers, and sticks. The drum circle continued for about one hour.

Communal drum circles have existed amongst indigenous people around the world for thousands of years. They began becoming popular in the United States during the counterculture movement in the  late 1960’s. Over the years, it has been found that drumming is therapeutic.

Typically, people gather to drum in drum “circles” with others from the surrounding community. The drum circle offers equality because there is no head or tail. It includes people of all ages. The main objective is to share rhythm and get in tune with each other and themselves. To form a group consciousness. To entrain and resonate. By entrainment, I mean that a new voice, a collective voice, emerges from the group as they drum together.

In his book “The Healing Power of the Drum”, Robert Lawrence Friedman states:

Some of the psychological applications in which hand drums are being used include assisting veterans to release the emotional pain of post-traumatic stress disorder, releasing the pent-up anger and negative emotions of “at-risk” adolescents, and promoting health in corporate executives through releasing their day-to-day stress, in addition to many other applications.

The Intermountain Teen Center plans to host more drum circles for the community in the future.