Richard Koras and Andrea Ogiba are a hard-working young couple pursuing a dream. On November 21 they opened a diner and bakery in Johnson Park where the Frosty’s used to be. They named it Ogiba’s after Andrea’s family name.

“My dad, Andrew Ogiba was the start of my inspiration for loving to bake. When he passed away my Nana Pat helped expand the horizon. They are a big part of all of this.”

Richard, soon to turn 30, and Andrea, 25, were married in April. They have two children, Andrew, 5, and Natalia, 2. Richard is a former Marine. He was stationed at Camp Pendleton where he worked as a Avionics Technician doing electrical work on the Huey and Cobra AH1-W and UH1-N helicopters. Both Richard and Andrea are seeking to further their education. Andrea is pursuing online studies with Escoffier School of Culinary Arts to receive a pastry certificate. Richard is working toward a degree in computer information systems. Richard is also working three days a week at Ray’s market.

The couple’s goals for the restaurant are to “support our family, give back to the community, and expand.” Currently the restaurant is open from 4 a.m. to 2 p.m. In the future they hope to serve dinner also.

The couple worked hard for six months to prepare the building for their opening. Beginning in June, they replaced the water main, painted the walls, installed tiling in the floor, put in new sinks, improved fire prevention, repaired gas leaks and did a lot of cleaning. They had hoped to open by August 1, but completing the work and going through the regulatory process prolonged the opening till late November.

Two weeks before opening someone stole Andrea’s cell phone. Shortly after, one panel of the to-go window was broken. The perpetrator did not climb through the window but reached through and grabbed some valves off of the counter. Ogiba suspects that the thief was hoping to steal some tools but couldn’t get in because of the jagged broken glass.

After the business opened, word began to spread that there was a new restaurant and bakery in the area. Business began to pick up.

Ogiba said, “People were excited and eager to try the food. The response was good.  Sometimes it is breakfast and sometime it is lunch, But the fresh baked goods always sell out. The demand for baked goods is more that my two hands can handle. I do all the baking and no one else knows my recipes.”

Then in the wee hours of the morning of Monday, December 17, a thief removed the plastic covering from the to-go window and stole $200 worth of bacon, plus five pounds of sausage, and a loaf of banana bread. Richard recovered the window and reinforced it with boarding.

Inside view of broken window

That did not deter the thief however. The next night he struck again forcing the board back and shattering the other panel of glass so that he could slide the window open and climb in again. This time he stole shredded cheese, bacon bits, Crisco, three more loaves of banana bread, and some Pam. Then he got out through the back door. 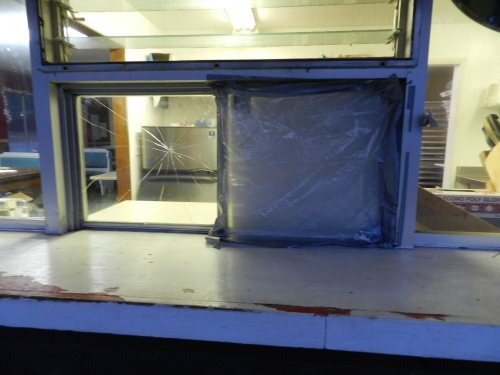 Outside view of Broken window

“It was as though he had a grocery list, and he wanted more banana bread. He had to search for it because I had hidden it but he found it.” said Andrea.

She was particularly aggravated that the crook had stolen the Crisco because it was her son Andrew’s fifth birthday and she needed it to prepare the cake.

Richard and Andrea come in every evening to prepare and bake for the next morning. They work through the evening into the night. Then they go home to rest and return the next morning at 3:30 to open up. They estimate that the thief comes between 1:30 a.m. when the last patrol passes through Johnson Park and the time of their return. Ogiba estimates that the combined cost for repair to the window and the stolen goods is over $500.

The response of the people living in the community to the burglaries has been overwhelmingly supportive.

“People want to help. They are angry that this has happened. They are afraid that we may close the business and leave,” Ogiba said.

Many have come to express their support and desire to help. The incidents have been reported to the Sheriff’s Department.

The couple remains firm in their determination to succeed.