The Run4Salmon, a prayerful journey tracing the historical spawning path of the Winnemem Wintu Tribe’s salmon, will stop in Redding Sept. 19 for a night of music and film to inspire the community to protect the salmon, the waters and indigenous lifeways.

The Run4Salmon Redding concert will be 6-9  p.m. Tuesday, Sept. 19 at the Redding Vets Hall, 1605 Yuba St. The evening will include a special screening of the documentary Salmon Will Run about last year’s Run4Salmon as well as musical performances by Raye Zaragona, Hawane Rios, Goodshield Aguilar,, Stewie G, and Audiopharmacy’s Desirae Harp. There will also be a speaking presentation by Winnemem Wintu Chief and Spiritual Leader Caleen Sisk, who is leading the tribe’s groundbreaking efforts to bring home the McCloud River salmon currently thriving in New Zealand.

Concert tickets are $10 presale and $15 at the door. There will be merchandise for sale. Tickets and more information are available at Run4Salmon.org.

The 2017 Run4Salmon began Sept. 9 when the Winnemem Wintu and hundreds of supporters departed from the Ohlone village of Sogorea Te in Vallejo to make the historical journey the salmon once took. Over 14 days, Run4Salmon participants will walk, bike, run, paddle and ride horses 300 miles up the Sacramento River to the McCloud River near Mount Shasta for a Sept. 22 closing ceremony.

The salmon were once integral components of the Winnemem Wintu’s cultural and spiritual traditions before Shasta Dam blocked the salmon from returning to the McCloud River. The winter run salmon numbers have dwindled due to dams, water diversions, climate change and habitat destruction.

The Run4Salmon is meant to increase support for the Winnemem Wintu’s plan to return their wild salmon from New Zealand to the glacial waters above Shasta Dam by developing a swimway around the dam. Read more about the plan here: http://www.water.ca.gov/fishpassage/docs/shasta_winnemem.pdf

Driving up to Mt Shasta on August 26, I asked my daughter if she would like to see the Lower Falls of the McCloud River. She said she would, so we turned off of Hwy 89 onto the McCloud River Loop and headed down to the falls, also called Fowler Falls.

Oftentimes when I visit these falls in the summer I see lots of young people diving or jumping off of the rocks into the pool, but on this day I saw no swimmers. Instead, I witnessed four young men fishing from the rocks by the waterfall. 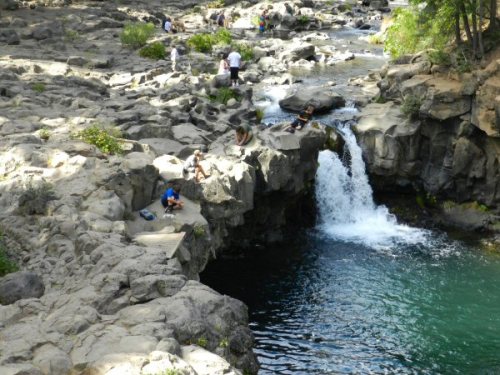 The McCloud River is the traditional home territory of the Winnemem Wintu Tribe. 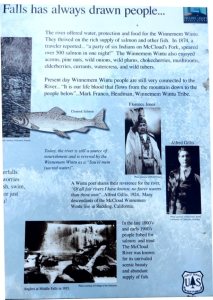 The Wintu name for the falls is Nurunwitipum, which means “falls where the salmon turn back.” During the warm summer season, there was a village here and the Winnemem Wintu fished and hunted around the Lower Falls. The McCloud continued to be rich in salmon, steelhead and native wild trout until the closing of the gates of Shasta Dam in 1943.

Since that time, salmon have been unable to migrate into the Upper Sacramento, Pit, McCloud and other tributary streams, eliminating a large portion of the best salmon habitat in the Sacramento basin. Shasta Dam also flooded 90 percent of the traditional territory of the Winnemem Wintu people.

Shasta Dam has provided a lot of electricity, facilitated water management, and provided jobs and recreational opportunities for the people of California, but my heart and tears pour out for the native Wintu people.

Nowadays, the gorgeous area continues to be a popular site for hiking, swimming, camping, and fishing. The river is stocked with rainbow trout for the licensed fishing public. I watched the young boy diligently fishing from above the falls.

As time went by, one of the fishermen assumed a more relaxed posture.

Meanwhile above the falls, visitors were enjoying hiking, walking their dogs, taking pictures, meeting one another and conversing.

Humans and dogs meet above the fall

As I was taking pictures a local resident came up to watch, wondering whether or not I might toss him a little treat.