Redding California –Shasta County joins the nation in kicking off National Child Abuse Prevention Awareness Month! This is a time to acknowledge the importance of families and communities working together to prevent child abuse and neglect, and to promote the social and emotional well-being of children and families.

From Oct 1, 2017 to Sep 30, 2018 there were 675 children with one or more abuse or neglect allegations in Shasta County. This is a staggering statistic that is unfortunately rising. The Shasta County Child Abuse Prevention Coordinating Council (Shasta CAPCCC) has been on the front lines fighting against child abuse and neglect for several years. We believe that together, our community must work towards creating a place where no child is harmed by abuse and neglect. To keep our children safe, community-minded individuals across the state are standing up for families; let’s join that stance here in Shasta County.

Crystal Johnson, Project Manager for The Shasta County Child Abuse Prevention Council said “The buzz phrase lately is “Adverse Childhood Experiences” and that phrase is linked to the ACEs survey administered in Shasta County in 2012. That data showed that our county scored double the CA average. Aces may include abuse, neglect and a range of household dysfunctions such as witnessing domestic violence, growing up with substance abuse, mental illness, parental discord, or crime in a household. ACEs are strongly related to development and prevalence of a wide range of health problems, including substance abuse in adulthood. The ACEs survey was an eye opener for Shasta County proving what most of us suspected; families are struggling and children are not provided with tools they need to become successful adults thus feeding the generational cycle. Support and stand with CAPCC this April to unite and help make families stronger and learn about ways prevent and combat ACE’s “

Join us on March 26th at the Board of Supervisors Chambers (1450 Court Street, Redding) at 9:00 a.m. as we proclaim the month of April as Child Abuse Prevention Awareness Month in Shasta County. Shasta CAPCC Board member Doctor Sean Dugan will be accepting that Proclamation. There will be additional Proclamations on April 2nd at 6:00 p.m.: City of Anderson, City of Redding or City of Shasta Lake all at the specific City Hall buildings.

Attend the Pinwheel Garden of Hope Planting Ceremony on April 3rd at noon at The Shasta CAPCC office lawn: 2280 Benton Drive, Redding Ca. Plant a pinwheel in the ground and make a stand: every child deserves to grow up free of abuse and neglect. The pinwheels reflect the bright future that all children deserve. The pinwheel is a positive emblem of the effect we can have when we work together to prevent child abuse. That day, individuals can also take home a FREE pinwheel garden that they can plant in front of their home or business.

Wear blue! You can show support by wearing the color blue at any prevention related events during the month of April but there is also a National Wear Blue for Kids day and that is April 5, 2019.

We encourage that you tag Shasta County Child Abuse Prevention Council on Facebook to spread awareness of the Pinwheel gardens and for #WearBlue4Kids.

Perkins has a 4.0 grade point. She is active in volleyball and plays flute in the band. She also enjoys playing piano, drawing, and writing stories. She would like to train a dog or a cat. When asked how she would train a cat, she said, “Like a dog!” After finishing high school, she plans to attend college to get a four-year degree.

Tessa’s parents Annie and Herb Perkins and her grandmother Linda Bates attended the dinner to see their daughter honored. Her mother, who noted that Tessa has had two surgeries for cerebral palsy, said they are very proud of their daughter’s achievement in academics.

Eighth-grader Sebastian also has a 4.0 grade point average. He competes in track and enjoys mowing lawns. He is looking forward to playing football. He is also good at baseball and tennis. He likes to read. In the future he would like to be a cook in the Navy.

Sebastian’s parents Jennifer Mitchell and Ellis Penn also attended. Mr. Penn said that he is very proud of the person that his son is becoming.

Each student was presented by Lion George Whitfield with a check from the Burney Lions Club for $50.

The InterMountain Teen Centers are hosting a Drum Circle with Verena Compton Wednesday March 20 6:00pm-7:00pm in the great room at Hill Country Clinic in Round Mountain.

For more than forty years the fireman’s carnival has been raising money for the McArthur Fire Department.

Lots of fun for all

This year, Saturday evening March 2, hundreds of children and parents came to the Inter-Mountain Fairgrounds to win prizes in a dozen different events. 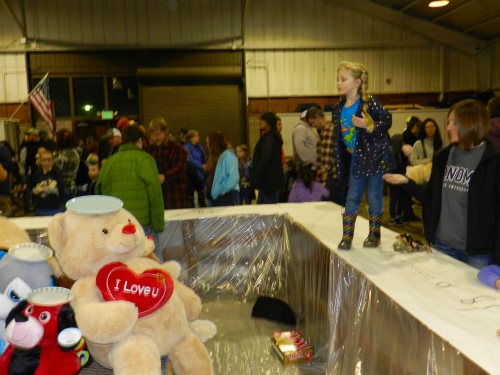 Hoping to win a loveable bear 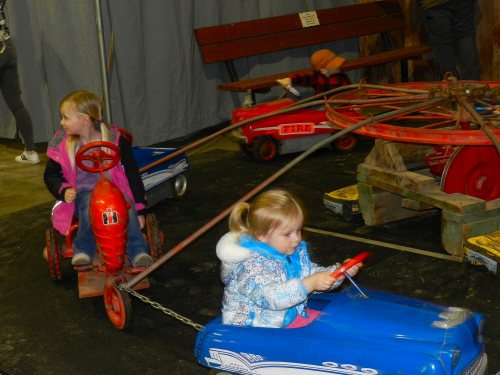 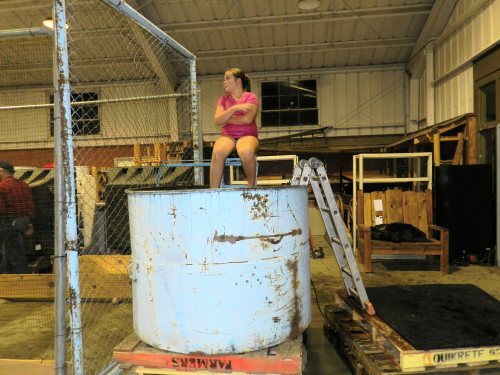 Ready for a dunk

The do-do duck tried to escape

Meanwhile in Ingram Hall over a hundred people enjoyed playing Bingo for prizes.

Bingo is fun too

This year Inter-Mountain royalty was there to assist the Carnival.

Interact students Alexus Bellino and Kaitlin Estes talk with a resident of the nursing home in Agua Prieta, Mexico. 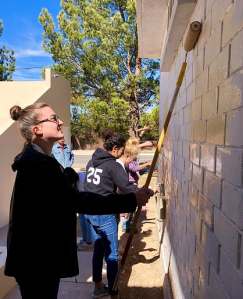 Heather Cook and other Interact students paint an amphitheater in Agua Prieta, Mexico.

Students cooked hamburgers for 200 children in an underserved neighborhood, painted an amphitheater that had previously been a site for drug sales, handed out soccer balls to children at an after-school foster child facility, painted a mural they designed on the wall of the dining room at a nursing home, visited a local high school where they interested students in forming an Interact Club, and painted classrooms at a school for disabled children.

Intermountain Interactors were overwhelmed by some of the living conditions they saw and want to help more. The mother of one of the students who went on the trip said her daughter’s life is “forever changed”.

Interact students Maria Mercado and Jennifer Mercado talk with a boy at the foster children’s school in Agua Prieta, Mexico.

Rotarian Bob Jehn, who has organized the trip for the last two years said, “Providing these kind of experiences for the youth of our community gives me great satisfaction. It is a great pleasure for me to head up our Rotary Club’s youth programs, and seeing the Interact student’s happy, bright, smiling faces is what gives me hope for the future.”

More than 100 people came to watch as 35 cars built by children in the Awana youth program competed in the race. Each child built and designed his car from a kit including a block of wood wheels and axles.

The race was conducted by Awana leaders Peter and Joshua Hennessey. 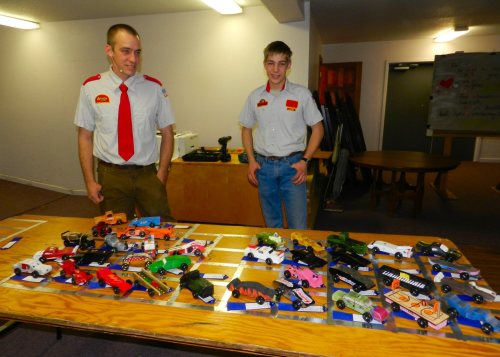 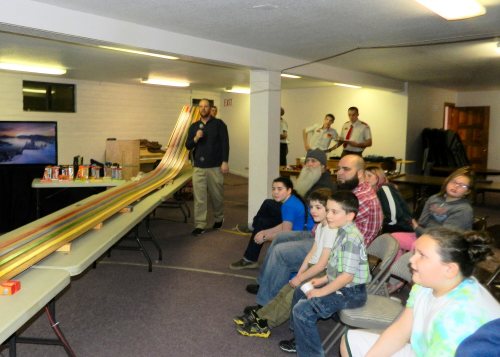 Then, the race was on.

The race is on

The cars race in four lanes. Every car ran four heats so that they all had a chance to compete in each lane. Times were determined by an electronic device at the finish line and the average times for all four heats were determined by computer. Hunter’s car not only won the  race but his car beat last year’s winning time in all four races.

The competition was swift and close

About sixty children from the Burney area participate in the Awana program that is held each Thursday evening from Fall through Spring.

Awana is a world-wide nonprofit ministry focused on providing Christian youth education for children ages 2-18. It was founded in 1950 in Illinois and has expanded throughout the United States and the world. Currently, Awana works through 58,000 churches throughout the world to serve 4 million children in 120 counties.

The name Awana is derived from the first letters of “Approved Workmen Are Not Ashamed” derived from 2 Timothy 2:15. The program includes two age groups, Sparks for younger children and T&T for older youth. 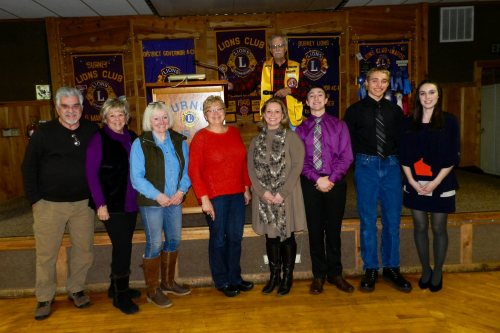 This year’s speech topic is “Freedom of the Press: What does it mean?”  Each student was required to give a speech no longer that ten minutes and no shorter than five minutes. All three speakers emphasized the fundamental importance of freedom of press in a democratic society illustrating their talk with poignant quotes and examples. They also provided examples of dictatorial and autocratic societies in which the government denies freedom of the press. In his succinct speech, Harner addressed the current controversy about “fake news.”

Melissa Madden, activities director at Burney High School, helped to coach the students in preparation for their speeches.

Lion Dr. Bill Cummings officiated the contest. Charlene Charlene Sickler, Sally and Rodney Armstrong, and Jill Barnett served as judges. After all of the scores were tabulated, Dr. Cummings announced the winner.

All three participants were awarded certificates and presented with a check by Lion George Chapman. Harner won $100 for first place. The other speakers each received $25.

The Club level contest is the first level of completion in the 82nd Annual Lions Multiple District Four Contest. Harner will now advance to the Zone level contest.

Lions Clubs throughout California and Nevada are holding club level contests during the month of February. Winners will advance through several levels to reach the District, Area, and Multiple District Four Contest.

Power is out at our downtown offices and some of our phone lines are not working correctly. If you need to report child abuse/neglect, please call 225-5144.

On January 30, Burney Elementary School first-grader Rylee Stier was honored at an afternoon assembly for being selected as the 2020-2021 Reflections Theme Search Contest winner by the National PTA Reflections Team.

Rylee’s submission, “I Matter Because…” was selected from nearly 100 student submissions across 21 states. The review was conducted by the National PTA Board Officer Team and Mission Engagement Committee.

As the Theme Search Contest winner, Rylee will receive $100 from National PTA and recognition in the 2019 Awards & Reflections Celebration program at the PTA annual convention.