More than 150 people came out for a candlelight memorial for Dave Wicks on Wednesday evening at Burney High School. My wife Linda was able to video some of the opening of the memorial and the candle lighting as well as many of the testimonies. The videos are listed in the order that they were taken.

Dave was a much loved member of the Intermountain community and this ceremony of remembrance was a testimony to that love. To those whose words we were unable to record, your testimony is also treasured. God bless all who came.

“Dave’s spirit is present with us, his nature lit up everybody he met. Not only Burney but other areas as well. He was like a warm light that lit up a dark night. His soul, heart, and mind will always be remembered. God has him in his arms now and for that I am grateful. My condolences to his friends and family, he will be missed.”

Hundreds come out for candlelight memorial for Dave Wicks

More than 150 people came out for a candlelight memorial for Dave Wicks on Wednesday evening at Burney High School. 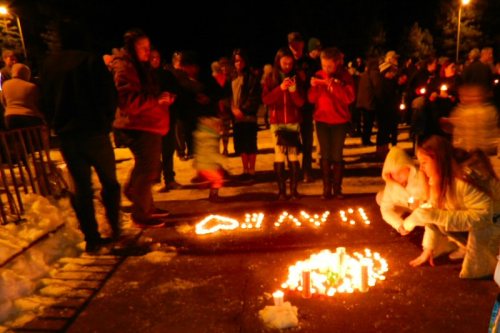 Kyle Cantrell helped to organize and oversee the event. Burney Volunteer Fire Department and Shasta County Sherriff’s Department personnel attended and businesses in town left their lights on for the evening to show their love and support for Dave and his family

Mr. Cantrell brought 300 candles for people to light. People lit all of the candles and placed them in a cleared area. Some people placed candles spelling out Dave’s name with a heart. 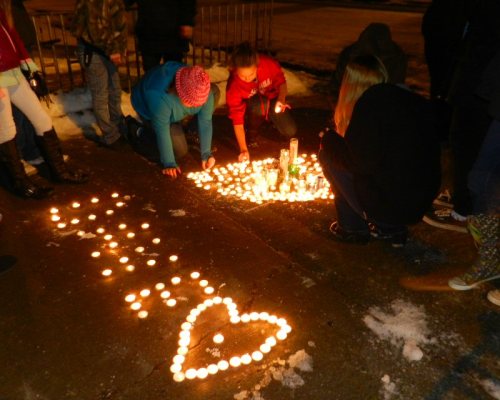 After all of the candles were lit, Cantrell opened up the microphone for anyone to share. The first to do so was a lifetime friend of Dave’s who had known him as a lad in Reno, had played music with him in the band Razormade, and had been present when Dave first met his wife Sonja. He said that he had never seen Dave happier than while he was living in this area with Sonja. He and Sonja shared the same joyful giving spirit.

Afterwards, many came forward to share how Dave’s goodness had touched their lives. Several shared how he had befriended them through his friendly warm-heartedness while working at the Shell Station.

A heartfelt testimony to Dave’s kindness

Others talked of how they had been uplifted by his music. One of his coworkers at the gas station spoke of Dave’s faith. Dave loved God and he loved people. He was kind to everyone.

A coworker talks about how wonderful it was working with Dave

Most of those who spoke shed tears as they testified to his acts of kindness. Dave was much-loved and will be dearly missed. At the end of the memorial everyone sang Dave’s name together.

There will be a memorial service for Dave at Burney High School on January 21.

To view videos of the memorial see: Videos of Candlelight Memorial for Dave Wicks Wednesday, December 28, 2016

Dave Wicks passed away on the night of December 21, 2016. During his life he had brought much joy to his family, his community of faith, and the community.

In February of 2012, Dave came with some of his friends to an open mic to the Blackberry diner and sang two songs.

Dave was one of the most talented musicians in the Intermountain area, but what he valued most was his faith and his family.