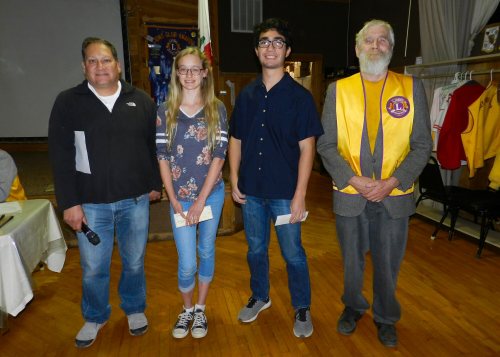 Senior Albert Scheckla has a grade point of 4.29, the highest grade point a student can earn taking AP classes. He is DSB President and Boys State Delegate. He is active in Leos Club, Interact Club, FNL, and S Club and plays on the baseball and basketball teams.

Albert enjoys snorkeling, hiking and traveling. In his spare time he likes to work, do volunteer work, watch television, and sleep. In the future he hopes to visit Palau Micronesia because his dad has been there and talked about it and he wants to see what it is like for himself.

After graduating, Albert plans to go to Shasta College and then transfer to Cal Poly, Chico State, or Sacramento State to get a degree in Mechanical Engineering.

Albert’s father and mother, Brian and Barbara Scheckla were both at the dinner. His dad said, “He does so much at school that we hardly ever get to see him. It would be nice to see him do some traveling because everyone who travels comes back with a different point of view.”

Albert’s father has been to over 60 countries.

Eighth grader Sage Harner has a 4.0 grade point average. She likes science and reading and plays on the girls volleyball team. She enjoys drawing, reading, and writing.

After finishing high school, she wants to go to college and become an author or an anesthesiologist. She hopes that one day she will publish a book.

Sage’s father and mother, Marti and Lori Harner, were present to watch their daughter honored. Mr. Harner said, “It is important that young people recognize what society expect of them and also to receive the rewards.”

The Burney Lions Club will be serving a Thanksgiving Day Dinner for the community at the Burney Lions Hall from 12 noon to 3 p.m on Thursday, November 22. Everybody is invited to come. Donations will be gratefully accepted but are not necessary.

In addition to the meal being served at the hall, The Burney Lions are also providing dinners to the Senior Nutrition Center which will be delivered to people who are housebound so that they can enjoy a Thanksgiving turkey meal.

The Burney Lions have been providing a Thanksgiving meal for the community for more than a quarter of a century. Thank you Burney Lions for your service.

Let us give thanks unto Our Creator!

Tis the season for Lions’ fruitcake

The Lions Club of Burney is baking delicious fruitcakes for the holiday season. Many have enjoyed these fruitcakes over the past years. The cakes are prepared according to an old family recipe. If you have tried one, you know they are not your usual fruitcake.  They are a wonderful holiday dessert and make great gifts for people that like fruitcake. The recipe does contain pecan nuts.

If you would like to order fruitcake, please call (530) 421-8889 and leave your name and phone number along with how many you are interested in. A Lions Club member will contact you. The donation is still only $10 per fruitcake!

Early in the morning on Friday October 25, Burney Lions were out in the cool air grilling pancakes and sausages for a preschool Red Ribbon breakfast. 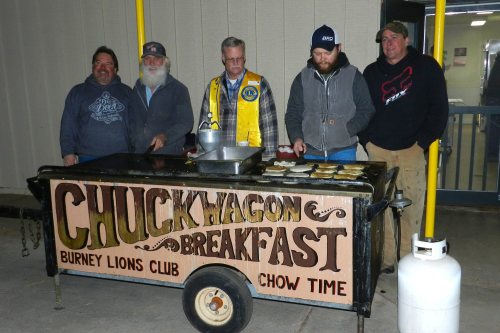 The community breakfast, sponsored by the Burney PTA, was part of Red Ribbon Week, a “celebration for students choosing to be drug free.”

Folks line up for pancakes and sausages 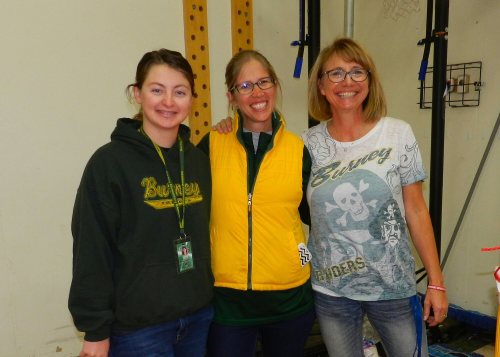 The theme for this year was “Life is a Journey. Travel Drug Free.” The weeks activities began with a flag salute at the flag pole. During the week, every class in the elementary school prepared a red ribbon to hang in the hall. 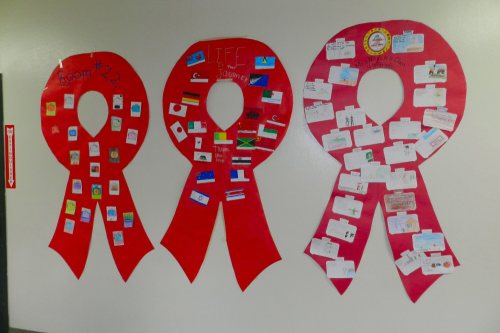 Each elementary school class made a red ribbon

Speaking of the breakfast, Bower said, “We are very fortunate to have the partnership with the Lions. It provides a wonderful opportunity for the community to come into the school.” 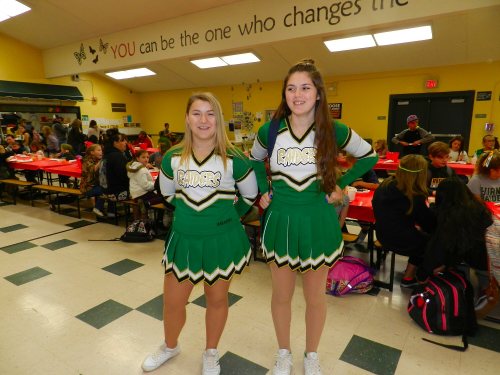 Raiders cheerleaders Brianna and Clarissa came to cheer kids on

It was a great way to start a day on the journey of life. 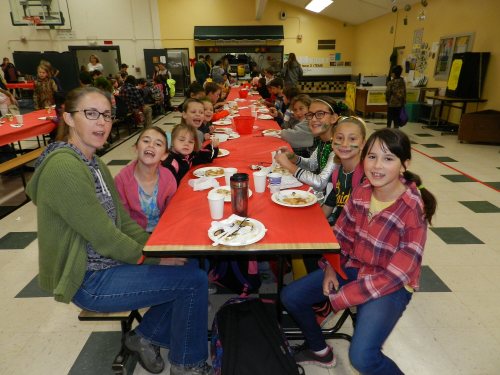 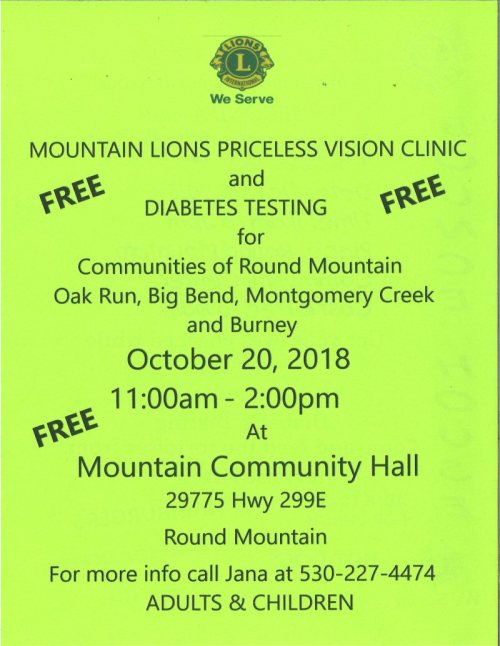 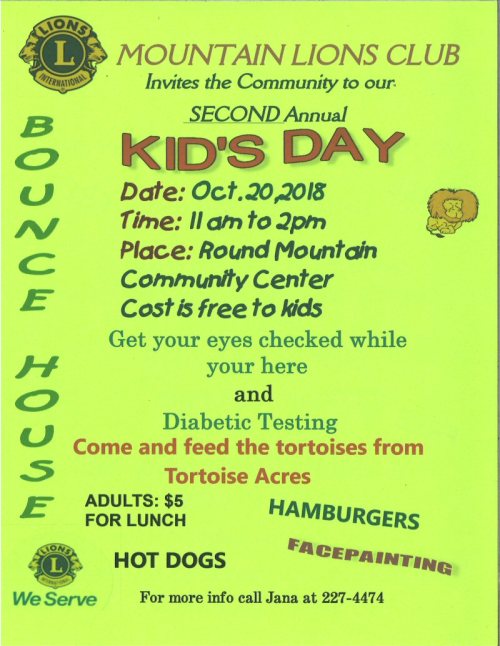 Once again it was wonderful to attend the annual Hertage Day at McArthur-Burney Falls Park to get a taste of life in the 1870’s. The event took place on Sunday October 7 from 12-4 p.m.

There were lots of hands on events like black-smithing, hatchet throwing, candle-making, pine-doll crafting, branding, tug-0-war, two-man sawing, and weaving. 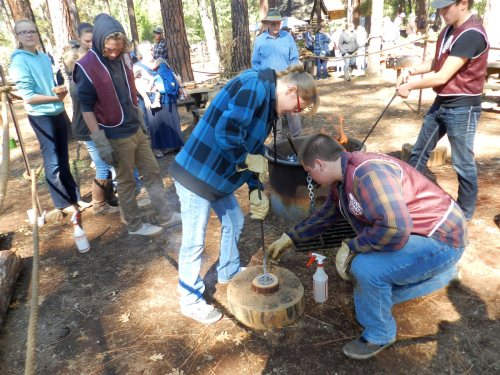 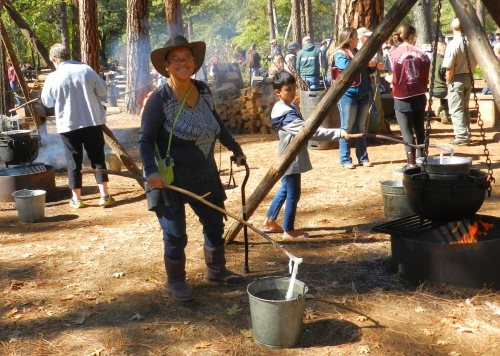 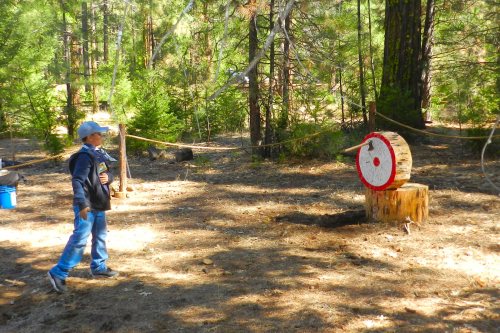 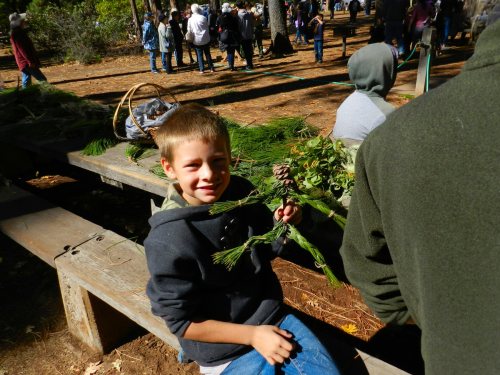 Proud of my pine doll 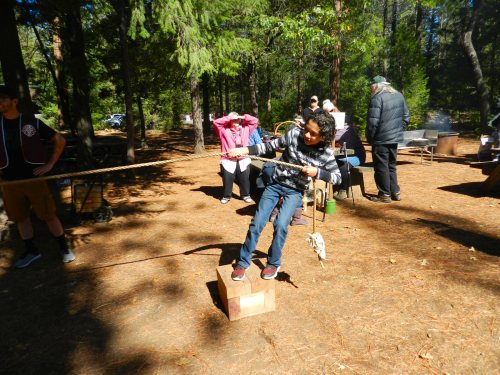 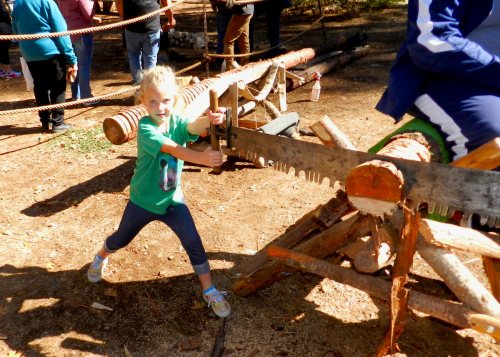 Fine music was played by various North-State groups from the Old Time Fiddlers Association. Once again I got to listen to one of my favorite groups of performers, The Shooting Stars and friends. 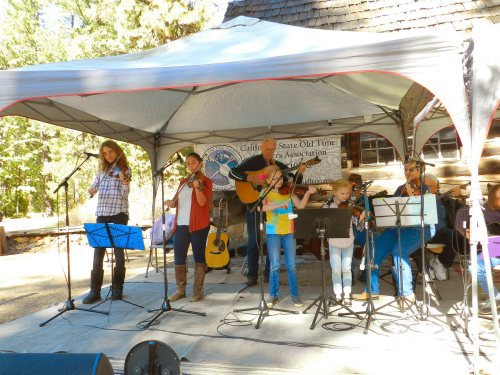 Sons of the Pioneers were there showing guns and implements from the old days and explaining about life on the frontier. 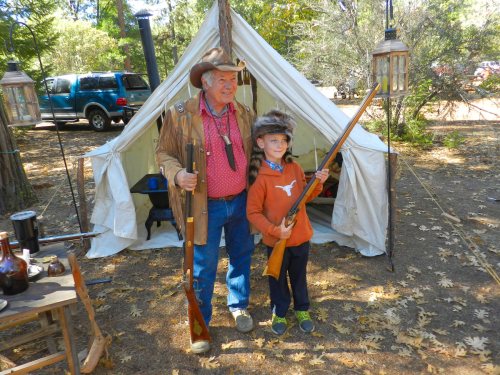 There was delicious apple crisp prepared fresh in the Dutch Oven and fresh pressed cider from Rotary. The Lions and Lions Auxiliary were there with hamburgers, hot dogs, and other treats. 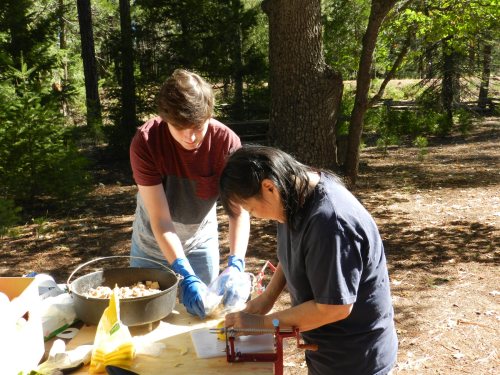 Apple Crisp for the Dutch Oven 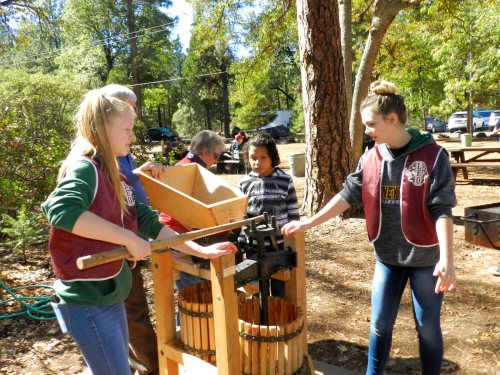 The Burney Lions Club came early to help direct parking. Leos and Scouts helped to man the events and displays. Lots of volunteers lent a hand to bring the past to life. Parking on Heritage Day was free. The weather was beautiful. In addition to enjoying the fun, the food and the music, many took time to hike the trail and observe the falls. It was awesome!

Heritage Day is sponsored each year by the McArthur-Burney Falls Interpretive Association in partnership with CAL PARKS. 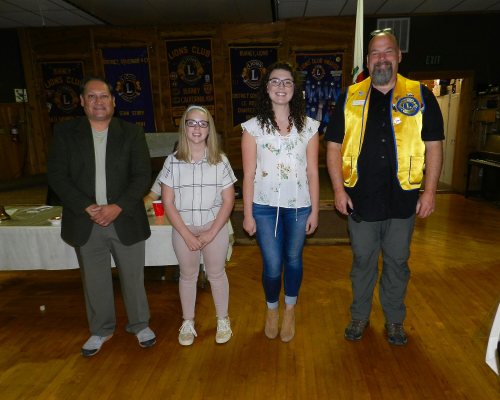 Senior Cassandra Taylor has a grade point of 3.8. She is President of Interact Club, President of S-Club, and Treasurer of ASB. She is active in FNL, mentoring, Leos Club, Leadership, CSF, cheerleading, and Raiders Radio.

Cassandra enjoys hunting, cheerleading, and MMA. She also enjoys doing projects with her mom like sewing and making poster boards for various organizations. She hopes to be able to travel outside the United States and see waterfalls. During the summer she has taught swim lessons.

After graduating she plans to attend junior college and then transfer to a four-year University.

Cassandra introduced her father Jason Taylor. Mr. Taylor said, “We are very proud of our daughter. She deserves a lot.”

For her achievement as Student of the Month, Ms. Taylor will be awarded a check for $100 from the Burney Lions Club.

Eighth grader Harper Tate has a 4.0 grade point average. She is President of her class and is active in CJSF and 4-H. She plays volleyball, basketball and track. She is also active in her church where one Sunday a month she helps take care of younger children in the nursery.

Harper likes playing with her dog and spending time with friends. She would like to learn how to juggle. In the future she would like to attend college to become a teacher and then teach in Cambodia.

Harper says she is good at “sports, cooking, shopping, and being on time.”

Her mother Amanda Tate, who came to see her daughter honored, said, “She is definitely a punctual child.”

Her father Jedidiah Tate said, “Harper is a real go-getter. She takes care of business.”

Harper’s brother Langston and sister Avery also came to see their sister honored. Harper will receive a check from the Burney Lions Club for $50 for being Eighth Grade Student of the Month.

Eighth-grader Yesenia has a grade point average of 2.72. She is a member of the volleyball team. She is very good at math. She enjoys reading and drawing flowers and little pictures. She would like to try skydiving. Her goal is to become a doctor practicing family medicine.

Lion George Whitfield presented her with a check for $50 on behalf of the Burney Lions Club.

Senior Favian Jimenez, Yesenia’s older brother has a 3.0 grade point average. He is a member of Leo’s, Interact Club, Leadership Club, and mentoring. He played on the football and basketball teams and competed in track and field. He enjoys playing video games and spending time with friends and family. He would like to try scuba diving. After graduating, he plans to attend Shasta College and then pursue a degree in civil engineering.

Favian was unable to attend the ceremony because he was on a trip with CSF to see a play in Ashland. In his absence, Lion Whitfield presented a check from the Burney Lions for $100 to his sister and asked her to give it to him when he returned from his trip to Oregon. 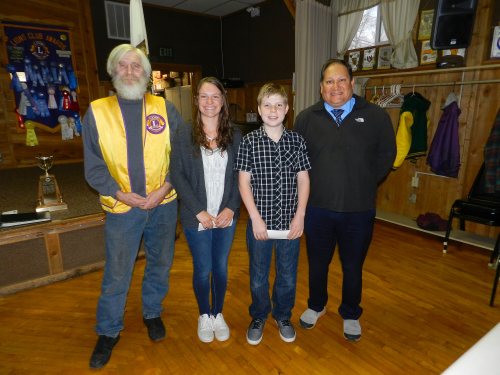 The students were introduced by Burney High School Principal Ray Guerrero. Lion George Whitfield presented each of the students with a check. Chelsea Davis was awarded $100, and Joel Biles received $50.

Senior Chelsea Davis has an outstanding grade point average of 4.43. She is a member of the S-Club,  CSF, FNL, Leos Club, Leadership Club, and Mentoring. She also plays on the basketball and softball teams.

She enjoys reading, listening to music, watching movies and spending time with loved ones. She would like very much to go on a cruise and to travel to other countries to learn about other cultures.

Chelsea’s mother and father, Nikki and Rich Davis attended to watch their daughter receive the award. Mr. Davis said “Chelsea worked very hard to become student of the month. Thank you very much to the Lions for the wonderful dinner and program and all that they do for the community.”

Eighth-grader Joel Biles also has a 3.13 grade point average. He is involved in activities at the Word of Life Church. He enjoys playing baseball, drawing, video games and watching television. Something that he hasn’t done but would like to do is “jump off a cliff into a lake.”

In the future Joel hopes to go to college and become and engineer.

Joel’s brother Ben and grandfather David Biles attended the ceremony. His grandfather praised Joel saying, “Congratulations on a good job! I hope that you come back many times.”